The Civilization of China 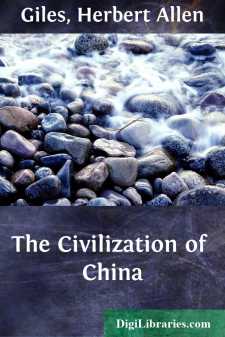 It is a very common thing now-a-days to meet people who are going to "China," which can be reached by the Siberian railway in fourteen or fifteen days. This brings us at once to the question—What is meant by the term China?

Taken in its widest sense, the term includes Mongolia, Manchuria, Eastern Turkestan, Tibet, and the Eighteen Provinces, the whole being equivalent to an area of some five million square miles, that is, considerably more than twice the size of the United States of America. But for a study of manners and customs and modes of thought of the Chinese people, we must confine ourselves to that portion of the whole which is known to the Chinese as the "Eighteen Provinces," and to us as China Proper. This portion of the empire occupies not quite two-fifths of the whole, covering an area of somewhat more than a million and a half square miles. Its chief landmarks may be roughly stated as Peking, the capital, in the north; Canton, the great commercial centre, in the south; Shanghai, on the east; and the Tibetan frontier on the west.

Any one who will take the trouble to look up these four points on a map, representing as they do central points on the four sides of a rough square, will soon realize the absurdity of asking a returning traveller the very much asked question, How do you like China? Fancy asking a Chinaman, who had spent a year or two in England, how he liked Europe! Peking, for instance, stands on the same parallel of latitude as Madrid; whereas Canton coincides similarly with Calcutta. Within the square indicated by the four points enumerated above will be found variations of climate, flowers, fruit, vegetables and animals—not to mention human beings—distributed in very much the same way as in Europe. The climate of Peking is exceedingly dry and bracing; no rain, and hardly any snow, falling between October and April. The really hot weather lasts only for six or eight weeks, about July and August—and even then the nights are always cool; while for six or eight weeks between December and February there may be a couple of feet of ice on the river. Canton, on the other hand, has a tropical climate, with a long damp enervating summer and a short bleak winter. The old story runs that snow has only been seen once in Canton, and then it was thought by the people to be falling cotton-wool.

The northern provinces are remarkable for vast level plains, dotted with villages, the houses of which are built of mud. In the southern provinces will be found long stretches of mountain scenery, vying in loveliness with anything to be seen elsewhere. Monasteries are built high up on the hills, often on almost inaccessible crags; and there the well-to-do Chinaman is wont to escape from the fierce heat of the southern summer. On one particular mountain near Canton, there are said to be no fewer than one hundred of such monasteries, all of which reserve apartments for guests, and are glad to be able to add to their funds by so doing.

In the north of China, Mongolian ponies, splendid mules, and donkeys are seen in large quantities; also the two-humped camel, which carries heavy loads across the plains of Mongolia....