The City of Fire 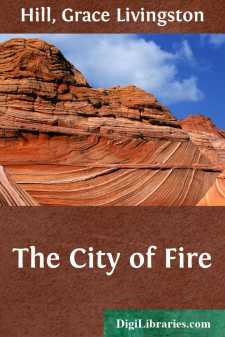 Sabbath Valley lay like a green jewel cupped in the hand of the surrounding mountains with the morning sun serene upon it picking out the clean smooth streets, the white houses with their green blinds, the maples with their clear cut leaves, the cosy brick school house wide winged and friendly, the vine clad stone church, and the little stone bungalow with low spreading roof that was the parsonage. The word manse had not yet reached the atmosphere. There were no affectations in Sabbath Valley.

Billy Gaston, two miles away and a few degrees up the mountain side, standing on the little station platform at Pleasant View, waiting for the morning train looked down upon the beauty at his feet and felt its loveliness blindly. A passing thrill of wonder and devotion fled through his fourteen-year-old soul as he regarded it idly. Down there was home and all his interests and loyalty. His eyes dwelt affectionately on the pointing spire and bell tower. He loved those bells, and the one who played them, and under their swelling tones had been awakened new thoughts and lofty purposes. He knew they were lofty. He was not yet altogether sure that they were his, but they were there in his mind for him to think about, and there was a strange awesome lure about their contemplation.

Down the platform was the new freight agent, a thickset, rubber-shod individual with a projecting lower jaw and a lowering countenance. He had lately arrived to assist the regular station agent, who lived in a bit of a shack up the mountain and was a thin sallow creature with sad eyes and no muscles. Pleasant View was absolutely what it stated, a pleasant view and nothing else. The station was a well weathered box that blended into the mountain side unnoticeably, and did not spoil the view. The agent's cabin was hidden by the trees and did not count. But Pleasant View was important as a station because it stood at the intersection of two lines of thread like tracks that slipped among the mountains in different directions; one winding among the trees and about a clear mountain lake, carried guests for the summer to and fro, and great quantities of baggage and freight from afar; the other travelled through long tunnels to the world beyond and linked great cities like jewels on a chain. There were heavy bales and boxes and many trunks to be shifted and it was obvious that the sallow station agent could not do it all. The heavy one had been sent to help him through the rush season.

In five minutes more the train would come from around the mountain and bring a swarm of ladies and children for the Hotel at the Lake. They would have to be helped off with all their luggage, and on again to the Lake train, which would back up two minutes later. This was Billy's harvest time. He could sometimes make as much as fifty cents or even seventy-five if he struck a generous party, just being generally useful, carrying bags and marshalling babies. It was important that Billy should earn something for it was Saturday and the biggest ball game of the season came off at Monopoly that afternoon....