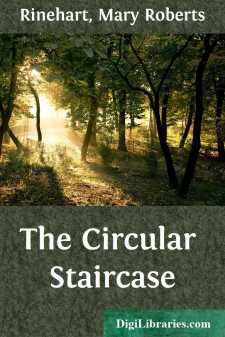 CHAPTER I I TAKE A COUNTRY HOUSE

This is the story of how a middle-aged spinster lost her mind, deserted her domestic gods in the city, took a furnished house for the summer out of town, and found herself involved in one of those mysterious crimes that keep our newspapers and detective agencies happy and prosperous. For twenty years I had been perfectly comfortable; for twenty years I had had the window-boxes filled in the spring, the carpets lifted, the awnings put up and the furniture covered with brown linen; for as many summers I had said good-by to my friends, and, after watching their perspiring hegira, had settled down to a delicious quiet in town, where the mail comes three times a day, and the water supply does not depend on a tank on the roof.

And then—the madness seized me. When I look back over the months I spent at Sunnyside, I wonder that I survived at all. As it is, I show the wear and tear of my harrowing experiences. I have turned very gray—Liddy reminded me of it, only yesterday, by saying that a little bluing in the rinse-water would make my hair silvery, instead of a yellowish white. I hate to be reminded of unpleasant things and I snapped her off.

"No," I said sharply, "I'm not going to use bluing at my time of life, or starch, either."

Liddy's nerves are gone, she says, since that awful summer, but she has enough left, goodness knows! And when she begins to go around with a lump in her throat, all I have to do is to threaten to return to Sunnyside, and she is frightened into a semblance of cheerfulness,—from which you may judge that the summer there was anything but a success.

The newspaper accounts have been so garbled and incomplete—one of them mentioned me but once, and then only as the tenant at the time the thing happened—that I feel it my due to tell what I know. Mr. Jamieson, the detective, said himself he could never have done without me, although he gave me little enough credit, in print.

I shall have to go back several years—thirteen, to be exact—to start my story. At that time my brother died, leaving me his two children. Halsey was eleven then, and Gertrude was seven. All the responsibilities of maternity were thrust upon me suddenly; to perfect the profession of motherhood requires precisely as many years as the child has lived, like the man who started to carry the calf and ended by walking along with the bull on his shoulders. However, I did the best I could. When Gertrude got past the hair-ribbon age, and Halsey asked for a scarf-pin and put on long trousers—and a wonderful help that was to the darning.—I sent them away to good schools. After that, my responsibility was chiefly postal, with three months every summer in which to replenish their wardrobes, look over their lists of acquaintances, and generally to take my foster-motherhood out of its nine months' retirement in camphor.

I missed the summers with them when, somewhat later, at boarding-school and college, the children spent much of their vacations with friends....