The Circassian Chief A Romance of Russia 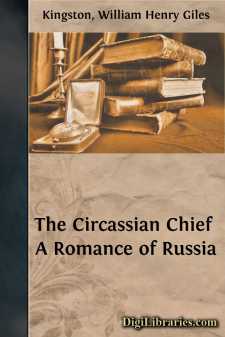 Between the ancient and modern capitals of Russia, a fine broad road now affords an easy communication, although, but a few years ago, the traveller who would journey from one city to the other, was compelled to proceed at a slow pace, along a wild track, over rough stony ground, through swamps, under dark forests, and across bleak and unsheltered plains.

The sun had already begun his downward course towards the more happy, and free lands of the far West, shedding forth his summer rays on the heads of two horsemen, who pursued their way in a southerly direction, along the yet unimproved part of the road, to which we have alluded. Their pace, as the nature of the ground over which they travelled required, was slow—their attention being chiefly occupied in guiding their steeds between the many deep ruts and cavities, which lay in their path.

The tone of their voices, their noble bearing, and general appearance, bespoke them at a glance, to belong to a station far above the common rank of life. They were dressed alike, in a half military uniform; their arms consisting solely of pistols, and heavy riding whips the latter even no despicable weapon when wielded by a strong arm.

The travellers might have been taken for brothers, but that the dark flashing eye, black hair, clear olive-complexion, and regular Grecian features of the one, offered too great a contrast to the laughing blue eye, light complexion and hair of the other, whose features, though inferior to those of his companion, were not deficient in manly beauty. There appeared to be scarcely any difference in their ages, both having emerged from boyhood, into that joyous time of life, when the man has completely shaken off what he then considers the irksome trammels of his childish days; happily, unconscious how soon in their stead, advancing years may too probably bring around him the many cares, and disappointments that flesh is doomed to bear, from manhood to the grave.

The last mentioned of the two wayfarers, was in reality, however, the elder; although the light laugh he occasionally indulged in, and his debonair manner, gave him a younger look, than his more serious companion. They were followed at a short distance by a most primitive looking, low, square vehicle, containing their baggage; drawn by a shaggy little pony, and driven by a man almost as rough looking and unpolished as the animal itself. A low crowned, broad-brimmed hat of felt, covered a head of sandy hair, while a huge long beard of the same hue hung down upon his breast: the twinkle of his light grey eye, and a smile on his lips, giving a good humoured expression to his flat, and otherwise unmeaning features.

His dress consisted of a long coat of coarse cloth, buckled round the waist by a leathern belt, and boots of the latter material, untanned, reaching just above his ankles. He urged on his little animal, as fast as it could travel, over the rugged road, whistling, as he lashed his whip, and whirled it round his head—his thoughts evidently not extending beyond his immediate occupation....