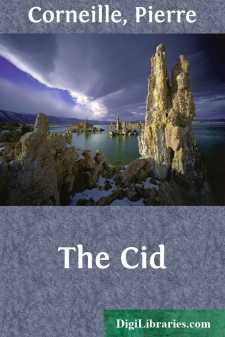 Chimène. Elvira, have you given me a really true report? Do you conceal nothing that my father has said?

Elvira. All my feelings within me are still delighted with it. He esteems Rodrigo as much as you love him; and if I do not misread his mind, he will command you to respond to his passion.

Chimène. Tell me then, I beseech you, a second time, what makes you believe that he approves of my choice; tell me anew what hope I ought to entertain from it. A discourse so charming cannot be too often heard; you cannot too forcibly promise to the fervor of our love the sweet liberty of manifesting itself to the light of day. What answer has he given regarding the secret suit which Don Sancho and Don Rodrigo are paying to you? Have you not too clearly shown the disparity between the two lovers which inclines me to the one side?

Elvira. No; I have depicted your heart as filled with an indifference which elates not either of them nor destroys hope, and, without regarding them with too stern or too gentle an aspect, awaits the commands of a father to choose a spouse. This respect has delighted him—his lips and his countenance gave me at once a worthy testimony of it; and, since I must again tell you the tale, this is what he hastened to say to me of them and of you: 'She is in the right. Both are worthy of her; both are sprung from a noble, valiant, and faithful lineage; young but yet who show by their mien [lit. cause to easily be read in their eyes] the brilliant valor of their brave ancestors. Don Rodrigo, above all, has no feature in his face which is not the noble [lit. high] representative of a man of courage [lit. heart], and descends from a house so prolific in warriors, that they enter into life [lit. take birth there] in the midst of laurels. The valor of his father, in his time without an equal, as long as his strength endured, was considered a marvel; the furrows on his brow bear witness to [lit. have engraved his] exploits, and tell us still what he formerly was. I predict of the son what I have seen of the father, and my daughter, in one word, may love him and please me.' He was going to the council, the hour for which approaching, cut short this discourse, which he had scarcely commenced; but from these few words, I believe that his mind [lit. thoughts] is not quite decided between your two lovers. The king is going to appoint an instructor for his son, and it is he for whom an honor so great is designed. This choice is not doubtful, and his unexampled valor cannot tolerate that we should fear any competition. As his high exploits render him without an equal, in a hope so justifiable he will be without a rival; and since Don Rodrigo has persuaded his father, when going out from the council, to propose the affair. I leave you to judge whether he will seize this opportunity [lit. whether he will take his time well], and whether all your desires will soon be gratified.

Chimène. It seems, however, that my agitated soul refuses this joy, and finds itself overwhelmed by it....