The Church and Modern Life 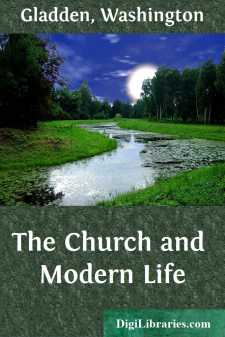 I The Roots of Religion

The church with which we are to deal in the pages which follow is the Christian church in the United States, comprising the entire body of Christian disciples who are organized into religious societies, and are engaged in Christian work and worship.

This church is not all included in one organization; it is made up of many different sects and denominations, some of which have very little fellowship with the rest. Among these groups are some who claim that their particular organizations are the true and only churches; that the others have no right to the name. Such is the claim of the Roman Catholic church and of the High Church Episcopalians. Their use of the word church would confine it to those of their own communions. Others would apply the term more broadly to all who profess and call themselves Christians, and who are united in promoting the teachings and principles of the Christian religion.

The church, as thus defined, has no uniform and authoritative creed, and no ruling officers or assemblies who have a right to speak for it; it is difficult, therefore, to make any definite statements about it. It is possible, nevertheless, to think of all these variously organized groups of people as belonging to one body. In some very important matters they are united. They all believe in one God, the Father Almighty; they all bear the name of Christ; they all acknowledge him as Lord and Leader; they all accept the Bible as containing the truth which they profess to teach. The things in which they agree are, indeed, far more important than the things in which they differ, and it is our custom often to speak of this entire body of Christian disciples as "the church," forgetting their differences and emphasizing their essential unity. This is the meaning which will be given to "the church" in these discussions.

Religion is a fact of the first magnitude. We sometimes hear ministers complaining that the people do not give it so much attention as they ought, but we shall find it true in all countries and in all the centuries that it is one of the main interests of human life. There are few subjects, probably there is no other subject, to which the human race has given so much thought as to the subject of religion. The greatest buildings which have been erected on this planet were for the service of religion; more books have been written about it than about any other theme; a large part of the world's art has had a religious impulse; many, alas! of the most destructive wars of history have been prompted by it; it has laid the foundations of great nations, our own among them, and has given form and direction to every great civilization under the sun.

It is not a churchman, or a theologian, it is Mr. John Fiske, one of the foremost scientific investigators, who has said of religion: "None can deny that it is the largest and most ubiquitous fact connected with the existence of mankind upon the earth."

About the size of the fact there is no disputing, but how shall we explain it?...