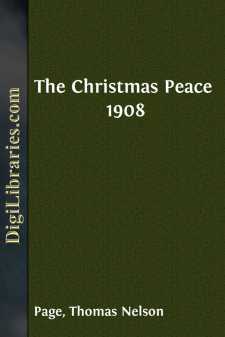 They had lived within a mile of each other for fifty-odd years, old Judge Hampden and old Colonel Drayton; that is, all their lives, for they had been born on adjoining plantations within a month of each other. But though they had thus lived and were accounted generally good men and good neighbors, to each other they had never been neighbors any more than the Lévite was neighbor to him who went down to Jericho.

Kindly to everyone else and ready to do their part by all other men, the Draytons and the Hampdens, whenever they met each other, always passed by on the other side.

It was an old story—the feud between the families—and, perhaps, no one now knew just how the trouble started. They had certainly been on opposite sides ever since they established themselves in early Colonial days on opposite hills in the old county from which the two mansions looked at each other across the stream like hostile forts. The earliest records of the county were those of a dispute between one Colonel Drayton and one Captain Hampden, growing out of some claim to land; but in which the chief bitterness appeared to have been injected by Captain Hampden's having claimed precedence over Colonel Drayton on the ground that his title of "Captain" was superior to Colonel Drayton's title, because he had held a real commission and had fought for it, whereas the Colonel's title was simply honorary and "Ye sayd Collonel had never smelled enough powder to kill a tom-cat."

However this might be and there was nothing in the records to show how this contention was adjudicated—in the time of Major Wil-mer Drayton and Judge Oliver Hampden, the breach between the two families had been transmitted from father to son for several generations and showed no signs of abatement. Other neighborhood families intermarried, but not the Drayton-Hall and the Hampden-Hill families, and in time it came to be an accepted tradition that a Drayton and a Hampden would not mingle any more than would fire and water.

The Hampdens were dark and stout, hot-blooded, fierce, and impetuous. They were apparently vigorous; but many of them died young. The Draytons, on the other hand, were slender and fair, and usually lived to a round old age; a fact of which they were wont to boast in contrast with the briefer span of the Hampdens.

"Their tempers burn them out," the Major used to say of the Hampdens.

Moreover, the Draytons were generally cool-headed, deliberate, and self-contained. Thus, the Draytons had mainly prospered throughout the years.

Even the winding creek which ran down through the strip of meadow was a fruitful cause of dissension and litigation between the families. "It is as ungovernable as a Hampden's temper, sir," once said Major Drayton, On the mere pretext of a thunder-storm, it would burst forth from its banks, tear the fences to pieces and even change its course, cutting a new channel, now to one side and now to the other through the soft and loamy soil. A lawsuit arose over the matter, in which the costs alone amounted to far more than the value of the whole land involved; but no one doubted that old Major Drayton spoke the truth when he declared that his father would rather have lost his entire estate with all its rolling hills and extensive forests than the acre or two which was finally awarded to Judge Hampden.

As neither owner would join the other even in keeping up a partition fence, there were two fences run within three feet of each other along the entire boundary line between the two places....