The Christmas Banquet (From "Mosses from an Old Manse") 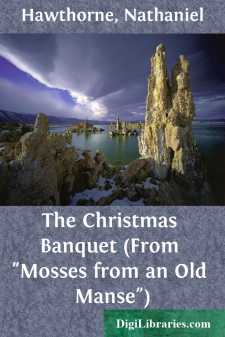 "I have here attempted," said Roderick, unfolding a few sheets of manuscript, as he sat with Rosina and the sculptor in the summer-house,—"I have attempted to seize hold of a personage who glides past me, occasionally, in my walk through life. My former sad experience, as you know, has gifted me with some degree of insight into the gloomy mysteries of the human heart, through which I have wandered like one astray in a dark cavern, with his torch fast flickering to extinction. But this man, this class of men, is a hopeless puzzle."

"Well, but propound him," said the sculptor. "Let us have an idea of hint, to begin with."

"Why, indeed," replied Roderick, "he is such a being as I could conceive you to carve out of marble, and some yet unrealized perfection of human science to endow with an exquisite mockery of intellect; but still there lacks the last inestimable touch of a divine Creator. He looks like a man; and, perchance, like a better specimen of man than you ordinarily meet. You might esteem him wise; he is capable of cultivation and refinement, and has at least an external conscience; but the demands that spirit makes upon spirit are precisely those to which he cannot respond. When at last you come close to him you find him chill and unsubstantial,—a mere vapor."

"I believe," said Rosina, "I have a glimmering idea of what you mean."

"Then be thankful," answered her husband, smiling; "but do not anticipate any further illumination from what I am about to read. I have here imagined such a man to be—what, probably, he never is—conscious of the deficiency in his spiritual organization. Methinks the result would be a sense of cold unreality wherewith he would go shivering through the world, longing to exchange his load of ice for any burden of real grief that fate could fling upon a human being."

Contenting himself with this preface, Roderick began to read.

In a certain old gentleman's last will and testament there appeared a bequest, which, as his final thought and deed, was singularly in keeping with a long life of melancholy eccentricity. He devised a considerable sum for establishing a fund, the interest of which was to be expended, annually forever, in preparing a Christmas Banquet for ten of the most miserable persons that could be found. It seemed not to be the testator's purpose to make these half a score of sad hearts merry, but to provide that the stern or fierce expression of human discontent should not be drowned, even for that one holy and joyful day, amid the acclamations of festal gratitude which all Christendom sends up. And he desired, likewise, to perpetuate his own remonstrance against the earthly course of Providence, and his sad and sour dissent from those systems of religion or philosophy which either find sunshine in the world or draw it down from heaven.

The task of inviting the guests, or of selecting among such as might advance their claims to partake of this dismal hospitality, was confided to the two trustees or stewards of the fund. These gentlemen, like their deceased friend, were sombre humorists, who made it their principal occupation to number the sable threads in the web of human life, and drop all the golden ones out of the reckoning. They performed their present office with integrity and judgment. The aspect of the assembled company, on the day of the first festival, might not, it is true, have satisfied every beholder that these were especially the individuals, chosen forth from all the world, whose griefs were worthy to stand as indicators of the mass of human suffering....