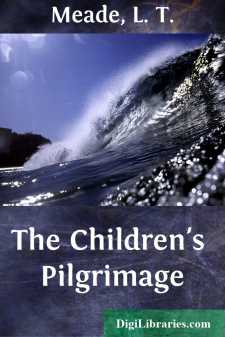 CHAPTER I. "THREE ON A DOORSTEP."

In a poor part of London, but not in the very poorest part—two children sat on a certain autumn evening, side by side on a doorstep. The eldest might have been ten, the youngest eight. The eldest was a girl, the youngest a boy. Drawn up in front of these children, looking into their little faces with hungry, loving, pathetic eyes, lay a mongrel dog.

The three were alone, for the street in which they sat was a cul-de-sac —leading nowhere; and at this hour, on this Sunday evening, seemed quite deserted. The boy and girl were no East End waifs; they were clean; they looked respectable; and the doorstep which gave them a temporary resting-place belonged to no far-famed Stepney or Poplar. It stood in a little, old-fashioned, old-world court, back of Bloomsbury. They were a foreign-looking little pair—not in their dress, which was truly English in its clumsiness and want of picturesque coloring—but their faces were foreign. The contour was peculiar, the setting of the two pairs of eyes—un-Saxon. They sat very close together, a grave little couple. Presently the girl threw her arm round the boy's neck, the boy laid his head on her shoulder. In this position those who watched could have traced motherly lines round this little girl's firm mouth. She was a creature to defend and protect. The evening fell and the court grew dark, but the boy had found shelter on her breast, and the dog, coming close, laid his head on her lap.

After a time the boy raised his eyes, looked at her and spoke:

"I think so, Maurice; I think it must be soon now."

"Never mind, darling, stepmother will soon wake now, and then you can come indoors and sit by the fire."

The boy, with a slight impatient sigh, laid his head once more on her shoulder, and the grave trio sat on as before.

Presently a step was heard approaching inside the house—it came along the passage, the door was opened, and a gentleman in a plain black coat came out. He was a doctor and a young man. His smooth, almost boyish face looked so kind that it could not but be an index to a charitable heart.

He stopped before the children, looking at them with interest and pity.

"How is our stepmother, Dr. Austin?" asked Cecile, raising her head and speaking with alacrity.

"Your stepmother is very ill, my dear—very ill indeed. I stopped with her to write a letter which she wants me to post. Yes, she is very ill, but she is awake now; you may go upstairs; you won't disturb her."

"Oh, come, Cecile," said little Maurice, springing to his feet; "stepmother is awake, and we may get to the fire. I am so bitter cold."

There was not a particle of anything but a kind of selfish longing for warmth and comfort on his little face. He ran along the passage holding out his hand to his sister, but Cecile drew back. She came out more into the light and looked straight up into the tall doctor's face:

"Is my stepmother going to be ill very long, Dr....