The Children: Some Educational Problems 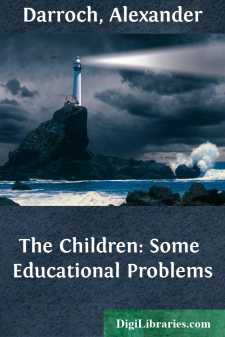 The problems as to the end or ends at which our educational agencies should aim in the training and instruction of the children of the nation, and of the right methods of attaining these ends once they have been definitely and clearly recognised, are at the present day receiving greater and greater attention not only from professed educationalists, but also from statesmen and the public generally. For, in spite of all that has been done during the past thirty years to increase the facilities for education and to improve the means of instruction, there is a deep-seated and widely spread feeling that, somehow or other, matters educationally are not well with us, as a nation, and that in this particular line of social development other countries have pushed forward, whilst we have been content to lag behind in the educational rear.

The faults in our present educational structure are many, and in some cases obvious to all. In the first place, it is said, and with much truth, that there is no systematic coherence between the different parts of our educational machinery, and no thorough-going correlation between the various aims which the separate parts of the system are intended to realise. As Mr. De Montmorency has recently pointed out, we have always had a national group of educational facilities, more or less efficient, but we have never had, nor do we yet possess, a national system of education so differentiated in its aims and so correlated as to its parts as to form "an organic part of the life of the nation." An educational system should subserve and foster the life of the whole: it should be so organised as to maintain a sufficient and efficient supply of all the services which a nation requires at the hands of its adult members. For it is only in so far as the educational system of any country fulfils this end that it can be "organic," and can be entitled to the claim of being called a national system.

This lack of coherence between the different parts of our educational system and the want of any systematic plan or unity running through the whole is due to many causes. As a nation, we are little inclined to system-making, and as a consequence the problem of education as a whole and in its total relation to the life and well-being of the State has received but scant attention from politicians. Educational questions, in this country, are rarely treated on their own merits and apart from considerations of a party, political, or denominational character, and hence the problems which have received attention in the past and evoke discussion at the present are concerned with the nature of the constitution, and limits of the power of the bodies to whom should be entrusted the local control of the educational agencies of the country, rather than with the problems as to the aims which we should seek to realise through our educational organisation, and of the methods by which these aims may be best realised. Hence, as a nation, we have rarely considered for its own sake and as a whole the problem of the education of the children. And until we have done so—until we have made clear to ourselves the kind of future citizen which as a State we desire to rear up—our educational agencies must manifest a like indefiniteness, a like inconsistency, and a like want of connection as do our educational aims and ideals.

Again, closely connected with this first-named defect in our educational organisation, and in fact following from it as a logical consequence, is our fatal method of developing this or that part of our educational system and of leaving the other parts to develop, if at all, without any central guidance or control, until at length we realise that the neglected parts also require attention, and must somehow or other be refitted into the whole. E.g., since 1870 there has been a great advance in the extent and intent of elementary education in both England and Scotland, but this progress has been of a one-sided nature, and there has been no corresponding advance either in the perfecting of the educational system as a whole, or in the co-ordination of the various grades of education. In Scotland, since the passing into law of the Education Bill of 1872, the means of elementary education have been widely extended and the methods of teaching have been greatly improved, but there has been no corresponding advance in the provision of the means of higher education, and as a consequence, at the present day, we find many districts without adequate provision for carrying on the education of the youth of the country beyond the Primary School stage....