The Cheerful Cricket and Others 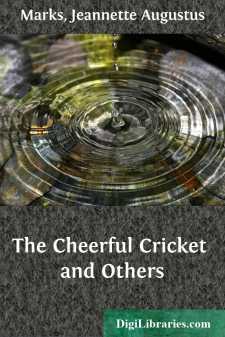 The slothful Toad (his real name was Toadie Todson) crawled out of his hole and looked about. He saw a Bee near by buzzing busily over a rich large clover blossom, and a sturdy Ant dragging a white parcel marked "Food" toward a round sandy house, and a cheery little Cricket marching rapidly up a green stalk in search of a dinner for three hungry little Cricketses. It was a busy time for all except Toadie Todson.

The spring had just come, that much Toadie Todson knew, and all these neighbors were busy putting their houses in order. Well, the Bee was stocking his honeycomb house, the Ant was putting her summer pantry into order and filling it with cookies, cream cheese, cake, and honey that her Majesty, the Queen Bee, sent over every day. And the Cricket, although his house was out of doors under a big green oak leaf that had dropped to the ground, was busy piling up all the food he could find for Mrs. Cricky to guard while she nursed the three little Cricketses.

Toadie Todson was tired to see so much going on. He wished they would all be quiet and stop hurrying around. He drew a long sigh, which made him swell up and look rounder and fatter than ever. Why couldn't his neighbors feed as he did? He just sat there and opened his big red slit of a mouth, gave a lazy snap, and a noisy fly, still buzzing, was swallowed up. He moved a little further away from his hole, dragging one fat, squashy leg after the other, then down he squatted again.

A little ball of green inch-worm dropped off the bush on to Toadie Todson's back and began to measure its length over Toadie's big warts and veins. It made him feel very important to have an inch-worm all to himself to tickle his back, as important as an Egyptian Queen with a slave to tickle the sole of her foot all the hot afternoon long. Toadie Todson swelled with pride as the green inch-worm went measuring up and down, up and down his back.

The Busy Bee just then flew buzzing by and buzzed to Toadie as he went: "There's a sand-slide rolling down this way. I'm getting out's fast as I can." When the Bee said sand-slide it sounded just like "Sz-sz-sz—z-z-z-z—ide." Toadie Todson opened his fat eyes and dropped his mouth in an ugly laugh. It made him sick to see any one in such a hurry. Then the Honest Ant went scurrying past and very kindly gave him the same message. But Toadie only sneered the more. He had been living in this very spot for years, almost as many as you have lived, and nothing had ever happened to him. No, he would stay right there, it was too much trouble to move for anybody. The green inch-worm was very green, and went on measuring Toadie Todson's back, for it didn't understand a word the Bee and Ant had said,