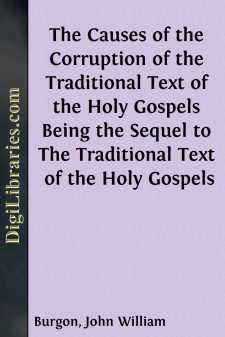 The reception given by the learned world to the First Volume of this work, as expressed hitherto in smaller reviews and notices, has on the whole been decidedly far from discouraging. All have had some word of encomium on our efforts. Many have accorded praise and signified their agreement, sometimes with unquestionable ability. Some have pronounced adverse opinions with considerable candour and courtesy. Others in opposing have employed arguments so weak and even irrelevant to the real question at issue, as to suggest that there is not after all so much as I anticipated to advance against our case. Longer examinations of this important matter are doubtless impending, with all the interest attaching to them and the judgements involved: but I beg now to offer my acknowledgements for all the words of encouragement that have been uttered.

Something however must be said in reply to an attack made in the Guardian newspaper on May 20, because it represents in the main the position occupied by some members of an existing School. I do not linger over an offhand stricture upon my 'adhesion to the extravagant claim of a second-century origin for the Peshitto,' because I am content with the companionship of some of the very first Syriac scholars, and with the teaching given in an unanswered article in the Church Quarterly Review for April, 1895. Nor except in passing do I remark upon a fanciful censure of my account of the use of papyrus in MSS. before the tenth century—as to which the reviewer is evidently not versed in information recently collected, and described for example in Sir E. Maunde Thompson's Greek and Latin Palaeography, or in Mr. F. G. Kenyon's Our Bible and the Ancient Manuscripts, and in an article in the just mentioned Review which appeared in October, 1894. These observations and a large number of inaccuracies shew that he was at the least not posted up to date. But what will be thought, when attention is drawn to the fact that in a question whether a singular set of quotations from the early Fathers refer to a passage in St. Matthew or the parallel one in St. Luke, the peculiar characteristic of St. Matthew—'them that persecute you'—is put out of sight, and both passages (taking the lengthened reading of St. Matthew) are represented as having equally only four clauses? And again, when quotations going on to the succeeding verse in St. Matthew (v. 45) are stated dogmatically to have been wrongly referred by me to that Evangelist? But as to the details of this point in dispute, I beg to refer our readers to pp. 144-153 of the present volume. The reviewer appears also to be entirely unacquainted with the history of the phrase μονογενησ Θεοσ in St. John i. 18, which, as may be read on pp. 215-218, was introduced by heretics and harmonized with Arian tenets, and was rejected on the other side. That some orthodox churchmen fell into the trap, and like those who in these days are not aware of the pedigree and use of the phrase, employed it even for good purposes, is only an instance of a strange phenomenon. We must not be led only by first impressions as to what is to be taken for the genuine words of the Gospels. Even if phrases or passages make for orthodoxy, to accept them if condemned by evidence and history is to alight upon the quicksands of conjecture.

A curious instance of a fate like this has been supplied by a critic in the Athenaeum, who, when contrasting Dean Burgon's style of writing with mine to my discredit, quotes a passage of some length as the Dean's which was really written by me. Surely the principle upheld by our opponents, that much more importance than we allow should be attributed to the 'Internal evidence of Readings and Documents,' might have saved him from error upon a piece of composition which characteristically proclaimed its own origin. At all events, after this undesigned support, I am the less inclined to retire from our vantage ground.

But it is gratifying on all accounts to say now, that such interpolations as in the companion volume I was obliged frequently to supply in order to fill up gaps in the several MSS. and in integral portions of the treatise, which through their very frequency would have there made square brackets unpleasant to our readers, are not required so often in this part of the work....