The Case for India 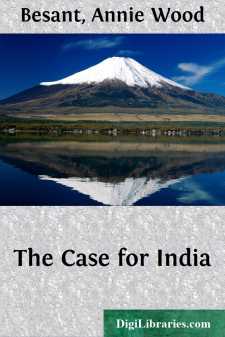 The Great War, into the whirlpool of which Nation after Nation has been drawn, has entered on its fourth year. The rigid censorship which has been established makes it impossible for any outside the circle of Governments to forecast its duration, but to me, speaking for a moment not as a politician but as a student of spiritual laws, to me its end is sure. For the true object of this War is to prove the evil of, and to destroy, autocracy and the enslavement of one Nation by another, and to place on sure foundations the God-given Right to Self-Rule and Self-Development of every Nation, and the similar right of the Individual, of the smaller Self, so far as is consistent with the welfare of the larger Self of the Nation. The forces which make for the prolongation of autocracy—the rule of one—and the even deadlier bureaucracy—the rule of a close body welded into an iron system—these have been gathered together in the Central Powers of Europe—as of old in Ravana—in order that they may be destroyed; for the New Age cannot be opened until the Old passes away. The new civilisation of Righteousness and Justice, and therefore of Brotherhood, of ordered Liberty, of Peace, of Happiness, cannot be built up until the elements are removed which have brought the old civilisation crashing about our ears. Therefore is it necessary that the War shall be fought out to its appointed end, and that no premature peace shall leave its object unattained. Autocracy and bureaucracy must perish utterly, in East and West, and, in order that their germs may not re-sprout in the future, they must be discredited in the minds of men. They must be proved to be less efficient than the Governments of Free Peoples, even in their favourite work of War, and their iron machinery—which at first brings outer prosperity and success—must be shown to be less lasting and effective than the living and flexible organisations of democratic Peoples. They must be proved failures before the world, so that the glamour of superficial successes may be destroyed for ever. They have had their day and their place in evolution, and have done their educative work. Now they are out-of-date, unfit for survival, and must vanish away.

When Great Britain sprang to arms, it was in defence of the freedom of a small nation, guaranteed by treaties, and the great principles she proclaimed electrified India and the Dominions. They all sprang to her side without question, without delay; they heard the voice of old England, the soldier of Liberty, and it thrilled their hearts. All were unprepared, save the small territorial army of Great Britain, due to the genius and foresight of Lord Haldane, and the readily mobilised army of India, hurled into the fray by the swift decision of Lord Hardinge. The little army of Britain fought for time; fought to stop the road to Paris, the heart of France; fought, falling back step by step, and gained the time it fought for, till India's sons stood on the soil of France, were flung to the front, rushed past the exhausted regiments who cheered them with failing breath, charged the advancing hosts, stopped the retreat, and joined the British army in forming that unbreakable line which wrestled to the death through two fearful winters—often, these soldiers of the tropics, waist-deep in freezing mud—and knew no surrender....