The Captain of the Polestar 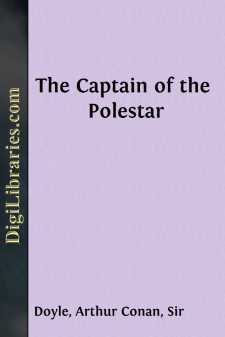 THE CAPTAIN OF THE "POLE-STAR." [Being an extract from the singular journal of JOHNM'ALISTER RAY, student of medicine.]

September 11th.—Lat. 81 degrees 40' N.; long. 2 degrees E. Still lying-to amid enormous ice fields. The one which stretches away to the north of us, and to which our ice-anchor is attached, cannot be smaller than an English county. To the right and left unbroken sheets extend to the horizon. This morning the mate reported that there were signs of pack ice to the southward. Should this form of sufficient thickness to bar our return, we shall be in a position of danger, as the food, I hear, is already running somewhat short. It is late in the season, and the nights are beginning to reappear.

This morning I saw a star twinkling just over the fore-yard, the first since the beginning of May. There is considerable discontent among the crew, many of whom are anxious to get back home to be in time for the herring season, when labour always commands a high price upon the Scotch coast. As yet their displeasure is only signified by sullen countenances and black looks, but I heard from the second mate this afternoon that they contemplated sending a deputation to the Captain to explain their grievance. I much doubt how he will receive it, as he is a man of fierce temper, and very sensitive about anything approaching to an infringement of his rights. I shall venture after dinner to say a few words to him upon the subject. I have always found that he will tolerate from me what he would resent from any other member of the crew. Amsterdam Island, at the north-west corner of Spitzbergen, is visible upon our starboard quarter—a rugged line of volcanic rocks, intersected by white seams, which represent glaciers. It is curious to think that at the present moment there is probably no human being nearer to us than the Danish settlements in the south of Greenland—a good nine hundred miles as the crow flies. A captain takes a great responsibility upon himself when he risks his vessel under such circumstances. No whaler has ever remained in these latitudes till so advanced a period of the year.

9 P.M,—I have spoken to Captain Craigie, and though the result has been hardly satisfactory, I am bound to say that he listened to what I had to say very quietly and even deferentially. When I had finished he put on that air of iron determination which I have frequently observed upon his face, and paced rapidly backwards and forwards across the narrow cabin for some minutes. At first I feared that I had seriously offended him, but he dispelled the idea by sitting down again, and putting his hand upon my arm with a gesture which almost amounted to a caress. There was a depth of tenderness too in his wild dark eyes which surprised me considerably. "Look here, Doctor," he said, "I'm sorry I ever took you—I am indeed—and I would give fifty pounds this minute to see you standing safe upon the Dundee quay. It's hit or miss with me this time. There are fish to the north of us. How dare you shake your head, sir, when I tell you I saw them blowing from the masthead?"—this in a sudden burst of fury, though I was not conscious of having shown any signs of doubt....