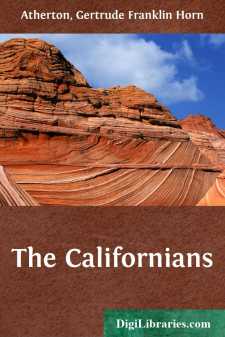 "I won't study another word to-day!" Helena tipped the table, spilling the books to the floor. "I want to go out in the sun. Go home, Miss Phelps, that's a dear. Anyhow, it won't do you a bit of good to stay."

Miss Phelps, young herself, glanced angrily at her briery charge, longingly at the brilliant blue of sky and bay beyond the long window.

"I leave it to Miss Yorba." Her voice, fashioned to cut, vibrated a little with the vigour of its roots. "You seem to forget, Miss Belmont, that this is not your house."

"But you are just as much my teacher as hers. Besides, I always know what Magdaléna wants, and I know that she has had enough United States history for one afternoon. When I go to England I'll get their version of it. We're brought up to love their literature and hate them! Such nonsense—"

"My dear Miss Belmont, I beg you to remember that you have but recently passed your sixteenth birthday—"

"Oh, of course! If I'd been brought up in Boston, I'd be giving points to Socrates and wondering why there were so many old maids in the world. However, that's not the question at present. 'Léna, do tell dear Miss Phelps that she needs an afternoon off, and that if she doesn't take it—I'll walk downstairs on my head."

Helena, even at indeterminate sixteen, showed promise of great beauty, and her eyes sparkled with the insolence of the spoiled child who already knew the power of wealth. The girl she addressed had only a pair of dark intelligent eyes to reclaim an uncomely face. Her skin was swarthy, her nose crude, her mouth wide. The outline of her head was fine, and she wore her black hair parted and banded closely below her ears. Her forehead was large, her expression sad and thoughtful. Don Roberto Yorba was many times more a millionaire than "Jack" Belmont, but Magdaléna was not a spoiled child.

"I don't know," she said, with a marked hesitation of speech; "I'd like to go out, but it doesn't seem right to take advantage of the fact that papa and mamma are away—"

"What they don't know won't hurt them. I'd like to have Don Roberto under my thumb for just one week. He'd get some of the tyranny knocked out of him. Jack is a model parent—"

Magdaléna flushed a dark ugly red. "I wish you would not speak in that way of papa," she said. "I—I—well—I'm afraid he wouldn't let you come here to study with me if he knew it."

"Well, I won't." Helena flung her arms round her friend and kissed her warmly. "I wouldn't hurt his Spanish dignity for the world; only I do wish you happened to be my real own cousin, or—that would be much nicer—my sister."

"Well?" demanded Miss Phelps, coldly. "What is it to be? Do you girls intend to study any more to-day, or not? Because—"

"She's glad to get out," said Helena, wisely. "She hates me, and I know she's got a beau. Come! Come!" She pulled Magdaléna from her chair, and the two girls ran to the balcony beyond the windows and leaned over the railing....