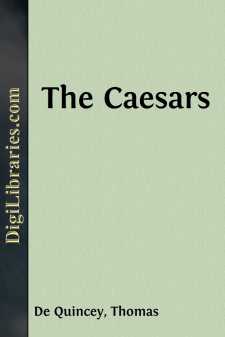 The condition of the Roman Emperors has never yet been fully appreciated; nor has it been sufficiently perceived in what respects it was absolutely unique. There was but one Rome: no other city, as we are satisfied by the collation of many facts, either of ancient or modern times, has ever rivalled this astonishing metropolis in the grandeur of magnitude; and not many—if we except the cities of Greece, none at all—in the grandeur of architectural display. Speaking even of London, we ought in all reason to say—the Nation of London, and not the City of London; but of Rome in her palmy days, nothing less could be said in the naked severity of logic. A million and a half of souls—that population, apart from any other distinctions, is per se for London a justifying ground for such a classification; à fortiori, then, will it belong to a city which counted from one horn to the other of its mighty suburbs not less than four millions of inhabitants [Footnote: Concerning this question— once so fervidly debated, yet so unprofitably for the final adjudication, and in some respects, we may add, so erroneously—on a future occasion.] at the very least, as we resolutely maintain after reviewing all that has been written on that much vexed theme, and very probably half as many more. Republican Rome had her prerogative tribe; the earth has its prerogative city; and that city was Rome.

As was the city, such was its prince—mysterious, solitary, unique. Each was to the other an adequate counterpart, each reciprocally that perfect mirror which reflected, as it were in alia materia, those incommunicable attributes of grandeur, that under the same shape and denomination never upon this earth were destined to be revived. Rome has not been repeated; neither has Cæsar. Ubi Cæsar, ibi Roma—was a maxim of Roman jurisprudence. And the same maxim may be translated into a wider meaning; in which it becomes true also for our historical experience. Cæsar and Rome have flourished and expired together. The illimitable attributes of the Roman prince, boundless and comprehensive as the universal air,—like that also bright and apprehensible to the most vagrant eye, yet in parts (and those not far removed) unfathomable as outer darkness, (for no chamber in a dungeon could shroud in more impenetrable concealment a deed of murder than the upper chambers of the air,)—these attributes, so impressive to the imagination, and which all the subtlety of the Roman [Footnote: Or even of modern wit; witness the vain attempt of so many eminent sort, and illustrious Antecessors, to explain in self- consistency the differing functions of the Roman Cæsar, and in what sense he was legibus solutus. The origin of this difficulty we shall soon understand.] wit could as little fathom as the fleets of Cæsar could traverse the Polar basin, or unlock the gates of the Pacific, are best symbolized, and find their most appropriate exponent, in the illimitable city itself—that Rome, whose centre, the Capitol, was immovable as Teneriffe or Atlas, but whose circumference was shadowy, uncertain, restless, and advancing as the frontiers of her all-conquering empire....