The business career in its public relations 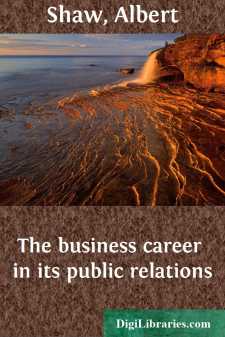 Despite all that can still be said against trade practices, against the business lies that are told, the false weights and measures that are used, the trade frauds to which the public is subjected, we are nearer a high commercial standard than ever before in the world's history.

Man's confidence in man is greater than ever before, the commercial loss through fraud and dishonesty is constantly diminishing and standards are slowly but surely moving upward. The honest man's chances for success in business are better than ever before, and the dishonest man's chances for lasting commercial success are less than ever before. To grow rich by failing in business is no longer regarded as an act of cleverness. The professional bankrupt finds it more and more difficult to get credit. He soon discovers that even his cash will not win for him the attention that his poorer neighbor commands simply by his character.

Education has done splendid service in raising commercial standards. As a rule, the high-toned business man is enlightened, and, as a rule, the dishonest, unscrupulous man in business is ignorant. Great aid in the direction of raising commercial standards may be rendered by the further spreading of knowledge and enlightenment. There are still many misguided men in business who imagine that there can be no success without false weights and measures, without lies and deceit. It is the duty of every man in business, who loves the work in which he is engaged, to do whatever he can to correct this mistaken notion, and to arouse the same sense of honor in the circles of commerce that, as a rule, is found in professional life.

In the decades to come men will take as much pride in being engaged in trade as men always have taken in being members of a liberal profession.

It seemed to me that a step toward hastening such a day might be taken by inviting the best thoughts of some of the country's best minds on the subject of "The Morals of Trade."

What better platform for the expression of such ideas than that furnished by the College of Commerce of the University of California? What better way to spread such thoughts than by means of their distribution in printed form? What better way to train to higher commercial standards the minds, not only of the youths who are seeking a university education and who have in view a business career, but also of the many already engaged in business who have not had the benefit of a college training?

It seemed to me that such a step might set in motion a commercially educational force which would prove far-reaching in its influence and most helpful in raising business character.

Thoughts such as these prompted the recent establishing of the lectureship on "The Morals of Trade" in connection with the College of Commerce of the University of California.

Let the hope be expressed that this is but the beginning of a movement which may be taken up by abler and wealthier men in business and broadened in many ways. A growing literature on "The Morals of Trade," representing the best thoughts of our best minds, is likely to live and to do splendid service in elevating commerce and in raising its standards....