The Buffalo Runners A Tale of the Red River Plains 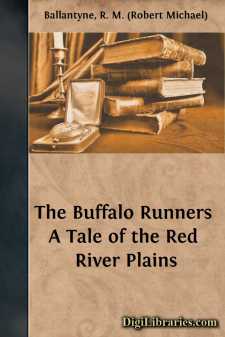 A Tale of the Red River Plains. Help!

A blizzard was blowing wildly over the American prairies one winter day in the earlier part of the present century.

Fresh, free and straight, it came from the realms of Jack Frost, and cold—bitterly cold—like the bergs on the Arctic seas, to which it had but recently said farewell.

Snow, fine as dust and sharp as needles, was caught up bodily by the wind in great masses—here in snaky coils, there in whirling eddies, elsewhere in rolling clouds; but these had barely time to assume indefinite forms when they were furiously scattered and swept away as by the besom of destruction, while earth and sky commingled in a smother of whitey-grey.

All the demons of the Far North seemed to have taken an outside passage on that blizzard, so tremendous was the roaring and shrieking, while the writhing of tormented snow-drifts suggested powerfully the madness of agony.

Two white and ghostly pillars moved slowly but steadily through all this hurly-burly in a straight line. One of the pillars was short and broad; the other was tall and stately. Both were very solid—agreeably so, when contrasted with surrounding chaos. Suddenly the two pillars stopped—though the gale did not.

Said the short pillar to the tall one—

“Taniel Tavidson, if we will not get to the Settlement this night; it iss my belief that every one o’ them will perish.”

“Fergus,” replied the tall pillar, sternly, “they shall not perish if I can help it. At all events, if they do, I shall die in the attempt to save them. Come on.”

Daniel Davidson became less like a white pillar as he spoke, and more like a man, by reason of his shaking a good deal of the snow off his stalwart person. Fergus McKay followed his comrade’s example, and revealed the fact—for a few minutes—that beneath the snow-mask there stood a young man with a beaming countenance of fiery red, the flaming character of which, however, was relieved by an expression of ineffable good-humour.

The two men resumed their march over the dreary plain in silence. Indeed, conversation in the circumstances was out of the question. The brief remarks that had been made when they paused to recover breath were howled at each other while they stood face to face.

The nature of the storm was such that the gale seemed to rush at the travellers from all quarters at once—including above and below. Men of less vigour and resolution would have been choked by it; but men who don’t believe in choking, and have thick necks, powerful frames, vast experience, and indomitable wills are not easily choked!

“It blows hard—whatever,” muttered Fergus to himself, with that prolonged emphasis on the last syllable of the last word which is eminently suggestive of the Scottish Highlander.

Davidson may have heard the remark, but he made no reply.

Day declined, but its exit was not marked by much difference in the very feeble light, and the two men held steadily on. The moon came out. As far as appearances went she might almost as well have stayed in, for nobody saw her that night....