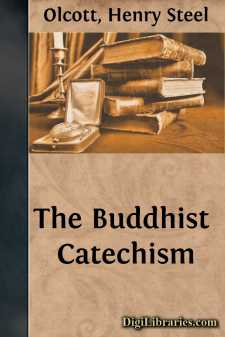 THE LIFE OF THE BUDDHA

1. Question. Of what religion[] are you?

A. It is a body of teachings given out by the great personage known as the Buddha.

3. Q. Is "Buddhism" the best name for this teaching?

A. No; that is only a western term: the best name for it is Bauddha Dharma.

4. Q. Would you call a person a Buddhist who had merely been born of Buddha parents?

A. Certainly not. A Buddhist is one who not only professes belief in the Buddha as the noblest of Teachers, in the Doctrine preached by Him, and in the Brotherhood of Arhats, but practises His precepts in daily life.

5. Q. What is a male lay Buddhist called?

7. Q. When was this doctrine first preached?

A. There is some disagreement as to the actual date, but according to the Sinhalese Scriptures it was in the year 2513 of the (present) Kali-Yuga.

8. Q. Give the important dates in the last birth of the Founder?

A. He was born under the constellation VisÄ on a Tuesday in May, in the year 2478 (K.Y.); he retired to the jungle in the year 2506; became Buddha in 2513; and, passing out of the round of rebirths, entered ParanirvÄna in the year 2558, aged eighty years. Each of these events happened on a day of full moon, so all are conjointly celebrated in the great festival of the full-moon of the month Wesak (VaisÄkha), corresponding to the month of May.

A. No. Buddha Dharma teaches no "divine" incarnation.

A. Yes; but the wisest, noblest and most holy being, who had developed himself in the course of countless births far beyond all other beings, the previous BUDDHAS alone excepted.

11. Q. Were there other Buddhas before him?

A. Yes; as will be explained later on.

A. No. It is the name of a condition or state of mind, of the mind after it has reached the culmination of development.

A. Enlightened; or, he who has the all-perfect wisdom. The PÄlÄ« phrase is Sabbannu, the One of Boundless Knowledge. In Samskrt it is Sarvajña.

A. SIDDHÄ€RTHA was his royal name, and GAUTAMA, or GOTAMA, his family name. He was Prince of KapilavÄstu and belonged to the illustrious family of the OkkÄka, of the Solar race.

16. Q. What people did this King reign over?

A. The SÄkyas; an Aryan tribe of Kshattriyas.

A. In India, one hundred miles north-east of the City of Benares, and about forty miles from the Himalaya mountains. It is situated in the NepÄl Terai. The city is now in ruins.

A. The RohÄ«nÄ«, now called the Kohana.

19. Q. Tell me again when Prince SiddhÄrtha was born?

A. Six hundred and twenty-three years before the Christian era.

A. It is now identified beyond question. An archaeologist in the service of the Government of India has discovered in the jungle of the NepÄl Terai a stone pillar erected by the mighty Buddhist sovereign, Asoka, to mark the very spot....