The Buccaneer A Tale 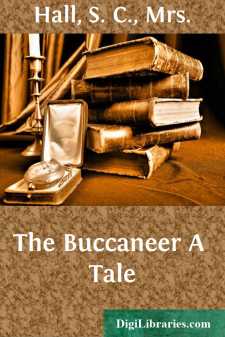 CHAPTER I. With roomy decks, her guns of mighty strength,Whose low-laid mouths each mounting billow laves,Deep in her draught, and warlike in her length,She seems a sea wasp flying on the waves. Dryden.

It was between the hours of ten and twelve on a fine night of February, in the year sixteen hundred and fifty-six, that three men moored a light skiff in a small bay, overshadowed by the heavy and sombre rocks that distinguish the Isle of Shepey from other parts along the coast of Kent, the white cliffs of which present an aspect at once so cheerful and so peculiar to the shores of Britain. The quiet sea seemed, in the murky light, like a dense and motionless mass, save when the gathering clouds passed from the brow of the waning moon, and permitted its beams to repose in silver lines on its undulating bosom.

It was difficult to account for the motive that could have induced any mariner to land upon so unpropitious a spot, hemmed in as it was on every side, and apparently affording no outlet but that by which they had entered—the trackless and illimitable ocean. Without a moment's deliberation, however, the steersman, who had guided his boat into the creek, sprang lightly to the shore: another followed; while the third, folding himself in the capacious cloak his leader had thrown off, resumed his place, as if resolved to take his rest, at least for a time.

"Little doubt of our having foul weather, master," observed the younger of the two, in a half querulous, half positive tone, as standing on a huge bank of sea-weed, he regarded first the heavens, and then the earth, with the scrutinising gaze of one accustomed to pry into their mysteries. His companion made no answer, but commenced unrolling a rich silk scarf, that had enveloped his throat, and twisting it into loose folds, passed it several times around his waist—having previously withdrawn from a wide leathern belt that intervened between his jacket and trousers a brace of curiously-fashioned pistols, which he now handed to the young sailor, while he elevated the hilt of his dagger, so that, without removing or disturbing the silken sash, he could use it in an instant. Having fully ascertained this point, by drawing the weapon more than once from its sheath, he again deposited the pistols in his belt, and buttoned his vest nearly to the throat; then drew the ends of his sash still more tightly, and placing a hand on either side, turned towards the cliffs, measuring their altitude with an eye, which, though deficient in dignity, was acute, and peculiarly fierce in expression.

The seaman, for such was his calling, was about five feet eight or nine inches in height. His hair, as it appeared from beneath a cap singularly at variance with the fashion of the time, curled darkly round a face, the marked features of which were sufficiently prominent, even in that uncertain light, to denote a person of no ordinary mind or character. His figure was firm and well-proportioned, and, though he might have numbered fifty years, it had lost neither strength nor elasticity. His whole bearing was that of a man whom nothing could have turned from a cherished purpose, were it for good or evil: though his eye was, as we have described it, fierce and acute, it was also restless and impatient as the waves upon which he had toiled from his earliest years.

Again he surveyed the cliff, and, stepping close to its base, applied the point of a boat-spear to remove the sea-weed that spring and high tides had heaped against it; he then summoned the youth to his assistance: after a few moments' search, the lad exclaimed,—

"Here it is, master—here is one—here another—but, my eyes! are we to trust our necks to such footing as this? I'd rather mount the top-gallant of the good ship Providence in the fiercest Nor-wester that ever blow'd, than follow such a lubberly tack."

"Then go back to the boat, sir," replied the elder, as he began, with cautious yet steady daring, to ascend—a course attended with evident danger, "Go back to the boat, sir—and, here, Jeromio! you have not been taught your duty on board the Providence, and, I presume, have no scruples, like our friend Oba Springall. Jeromio! I say, hither and up with me!"

"I am ready, sir," replied the youth, whose momentary dread had been dispelled by this attempt to promote a rival to the post of honour; "I am ready, sir:" muttering, however, soon afterwards to himself, as the difficulties of the way increased, "He thinks no more of his life than if he were a sprat or a spawn." No other word was breathed by either of the adventurers, as they threaded the giddy path, until about midway, when the elder paused and exclaimed, "A-hoy there, boy!...