The Brothers-In-Law: A Tale Of The Equatorial Islands; and The Brass Gun Of The Buccaneers 1901 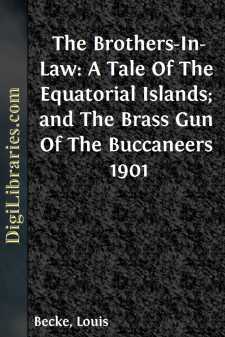 "There," said Tâvita the teacher, pointing with his paddle to a long, narrow peninsula which stretched out into the shallow waters of the lagoon, "there, that is the place where the battle was fought. In those days a village of thirty houses or more stood there; now no one liveth there, and only sometimes do the people come here to gather cocoanuts."

The White Man nodded. "'Tis a fair place to look upon. Let us land and rest awhile, for the sun is hot."

The native pastor swung the bow of the canoe round towards the shore, and presently the little craft glided gently upon the hard, white sand, and the two men got out, walked up to the grove of cocoa-palms, and sat down under their shade to rest and smoke until the sun lost some of its fierce intensity and they could proceed on their journey homeward to the principal village.

The White Man was the one trader living in Peru,{*} the native was a Samoan, and one of the oldest and bravest missionaries in the Pacific. For twenty years he had dwelt among the wild, intractable, and savage people of Peru—twenty years of almost daily peril, for in those days the warlike people of the Gilbert Group resented the coming of the few native teachers scattered throughout the archipelago, and only Tavita's undaunted courage and genial disposition had preserved the lives of himself and his family. Such influence as he now possessed was due, not to his persistent attempts to preach Christianity, but to his reputation for integrity of conduct and his skill as a fisherman and carpenter.

* Francis Island, or Peru, is one of the largest atolls ofthe Gilbert Group in the South Pacific, about one hundredand twenty miles south of the Equator

The White Man and he were firm friends, and that day they had been down to the north end of the lagoon to collect a canoe load of the eggs of a small species of tern which frequented the uninhabited portion of the island in myriad swarms.

Presently, as they sat and smoked, and lazily watched a swarm of the silvery mullet called kanae disporting themselves on the glassy surface of the lagoon, the White Man said—

"Who were these white men, Tâvita, who fought in the battle?"

"Hast never heard the story?" inquired the teacher in Samoan.

"Then listen," said Tâvita, re-filling his pipe and leaning his broad back against the bole of a cocoa-palm.

"It was nineteen years ago, and I had been living on the island but a year. In those days there were many white men in these islands. Some were traders, some were but papalagi tafea{*} who spent their days in idleness, drunkenness, and debauchery, casting aside all pride and living like these savage people, with but a girdle of grass around their naked waists, their hands ever imbued in the blood of their fellow white men or that of the men of the land.

"Here, on this island, were two traders and many beachcombers. One of the traders was a man named Carter, the other was named West Carter the people called 'Karta,' the other by his fore name, which was 'Simi' (Jim). They came here together in a whaleship from the Bonin Islands with their wives—two sisters, who were Portuguese half-castes, and both very beautiful women. Carter's wife had no children; West, who was the younger man, and who had married the younger sister, had two....