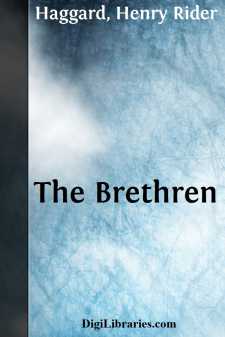 Salah-ed-din, Commander of the Faithful, the king Strong to Aid, Sovereign of the East, sat at night in his palace at Damascus and brooded on the wonderful ways of God, by Whom he had been lifted to his high estate. He remembered how, when he was but small in the eyes of men, Nour-ed-din, king of Syria, forced him to accompany his uncle, Shirkuh, to Egypt, whither he went, "like one driven to his death," and how, against his own will, there he rose to greatness. He thought of his father, the wise Ayoub, and the brethren with whom he was brought up, all of them dead now save one; and of his sisters, whom he had cherished. Most of all did he think of her, Zobeide, who had been stolen away by the knight whom she loved even to the loss of her own soul—yes, by the English friend of his youth, his father's prisoner, Sir Andrew D'Arcy, who, led astray by passion, had done him and his house this grievous wrong. He had sworn, he remembered, that he would bring her back even from England, and already had planned to kill her husband and capture her when he learned her death. She had left a child, or so his spies told him, who, if she still lived, must be a woman now—his own niece, though half of noble English blood.

Then his mind wandered from this old, half-forgotten story to the woe and blood in which his days were set, and to the last great struggle between the followers of the prophets Jesus and Mahomet, that Jihad [Holy War] for which he made ready—and he sighed. For he was a merciful man, who loved not slaughter, although his fierce faith drove him from war to war.

Salah-ed-din slept and dreamed of peace. In his dream a maiden stood before him. Presently, when she lifted her veil, he saw that she was beautiful, with features like his own, but fairer, and knew her surely for the daughter of his sister who had fled with the English knight. Now he wondered why she visited him thus, and in his vision prayed Allah to make the matter clear. Then of a sudden he saw this same woman standing before him on a Syrian plain, and on either side of her a countless host of Saracens and Franks, of whom thousands and tens of thousands were appointed to death. Lo! he, Salah-ed-din, charged at the head of his squadrons, scimitar aloft, but she held up her hand and stayed him.

"I am come to save the lives of men through you," she answered; "therefore was I born of your blood, and therefore I am sent to you. Put up your sword, King, and spare them."

"Say, maiden, what ransom do you bring to buy this multitude from doom? What ransom, and what gift?"

"The ransom of my own blood freely offered, and Heaven's gift of peace to your sinful soul, O King." And with that outstretched hand she drew down his keen-edged scimitar until it rested on her breast.

Salah-ed-din awoke, and marvelled on his dream, but said nothing of it to any man. The next night it returned to him, and the memory of it went with him all the day that followed, but still he said nothing.

When on the third night he dreamed it yet again, even more vividly, then he was sure that this thing was from God, and summoned his holy Imauns and his Diviners, and took counsel with them. These, after they had listened, prayed and consulted, spoke thus:

"O Sultan, Allah has warned you in shadows that the woman, your niece, who dwells far away in England, shall by her own nobleness and sacrifice, in some time to come, save you from shedding a sea of blood, and bring rest upon the land. We charge you, therefore, draw this lady to your court, and keep her ever by your side, since if she escape you, her peace goes with her."

Salah-ed-din said that this interpretation was wise and true, for thus also he had read his dream. Then he summoned a certain false knight who bore the Cross upon his breast, but in secret had accepted the Koran, a Frankish spy of his, who came from that country where dwelt the maiden, his niece, and from him learned about her, her father, and her home. With him and another spy who passed as a Christian palmer, by the aid of Prince Hassan, one of the greatest and most trusted of his Emirs, he made a cunning plan for the capture of the maiden if she would not come willingly, and for her bearing away to Syria....