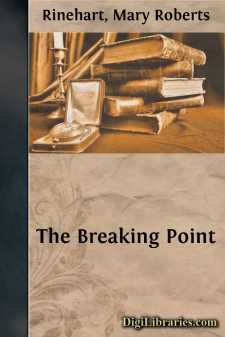 "Heaven and earth," sang the tenor, Mr. Henry Wallace, owner of the Wallace garage. His larynx, which gave him somewhat the effect of having swallowed a crab-apple and got it only part way down, protruded above his low collar.

"Heaven and earth," sang the bass, Mr. Edwin Goodno, of the meat market and the Boy Scouts. "Heaven and earth, are full—" His chin, large and fleshy, buried itself deep; his eyes were glued on the music sheet in his hand.

"Are full, are full, are full," sang the soprano, Clare Rossiter, of the yellow colonial house on the Ridgely Road. She sang with her eyes turned up, and as she reached G flat she lifted herself on her toes. "Of the majesty, of Thy glory."

"Ready," barked the choir master. "Full now, and all together."

The choir room in the parish house resounded to the twenty voices of the choir. The choir master at the piano kept time with his head. Earnest and intent, they filled the building with the Festival Te Deum of Dudley Buck, Opus 63, No. 1.

Elizabeth Wheeler liked choir practice. She liked the way in which, after the different parts had been run through, the voices finally blended into harmony and beauty. She liked the small sense of achievement it gave her, and of being a part, on Sundays, of the service. She liked the feeling, when she put on the black cassock and white surplice and the small round velvet cap of having placed in her locker the things of this world, such as a rose-colored hat and a blue georgette frock, and of being stripped, as it were, for aspirations.

At such times she had vague dreams of renunciation. She saw herself cloistered in some quiet spot, withdrawn from the world; a place where there were long vistas of pillars and Gothic arches, after a photograph in the living room at home, and a great organ somewhere, playing.

She would go home from church, however, clad in the rose-colored hat and the blue georgette frock, and eat a healthy Sunday luncheon; and by two o'clock in the afternoon, when the family slept and Jim had gone to the country club, her dreams were quite likely to be entirely different. Generally speaking, they had to do with love. Romantic, unclouded young love dramatic only because it was love, and very happy.

Sometime, perhaps, some one would come and say he loved her. That was all. That was at once the beginning and the end. Her dreams led up to that and stopped. Not by so much as a hand clasp did they pass that wall.

So she sat in the choir room and awaited her turn.

What appeared to the eye was a small and rather ethereal figure with sleek brown hair and wistful eyes; nice eyes, of no particular color. Pretty with the beauty of youth, sensitive and thoughtful, infinitely loyal and capable of suffering and not otherwise extraordinary was Elizabeth Wheeler in her plain wooden chair. A figure suggestive of no drama and certainly of no tragedy, its attitude expectant and waiting, with that alternate hope and fear which is youth at twenty, when all of life lies ahead and every to-morrow may hold some great adventure....