The Bread Line A Story of a Paper 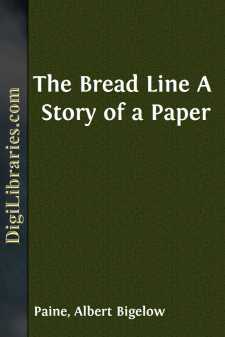 This is the story of a year, beginning on New Year's eve.

In the main it is the story of four—two artists and two writers—and of a paper which these four started. Three of them—the artists and one of the writers—toiled and dwelt together in rooms near Union Square, and earned a good deal of money sometimes, when matters went well. The fourth—the other writer—did something in an editorial way, and thus had a fixed income; that is, he fixed it every Saturday in such manner that it sometimes lasted until Wednesday of the following week. Now and then he sold a story or a poem "outside" and was briefly affluent, but these instances were unplentiful. Most of his spare time he spent in dreaming vague and hopeless dreams. His dreams he believed in, and, being possessed of a mesmeric personality, Barrifield sometimes persuaded others to believe also.

It began—the paper above mentioned—in the café of the Hotel Martin, pronounced with the French "tang," and a good place to get a good dinner on New Year's eve or in any other season except that of adversity, no recollection of which period now vexed the mind of the man who did something in an editorial way, or those of the two artists and the writer who worked and dwelt together in rooms near Union Square. In fact, that era of prosperity which began in New York for most bohemians in the summer of '96 was still in its full tide, and these three had been caught and borne upward on a crest that as yet gave no signs of undertow and oblivion beneath. But Barrifield, still editing at his old salary, had grown uneasy and begun to dream dreams. He did not write with ease, and his product, though not without excellence, was of a sort that found market with difficulty in any season and after periods of tedious waiting. He had concluded to become a publisher.

He argued that unless publishers were winning great fortunes they could not afford to pay so liberally for their wares.

He had been himself authorized to pay as much as fifteen cents per word for the product of a certain pen. He forgot, or in his visions refused to recognize, the possibility of this being the result of competition in a field already thickly trampled by periodicals, many of them backed by great capital and struggling, some of them at a frightful loss, toward the final and inevitable survival of the richest. As for his companions, they were on the outside, so to speak, and swallowed stories of marvelous circulations and advertising rates without question. Not that Barrifield was untruthful. Most of what he told them had come to him on good authority. If, in the halo of his conception and the second bottle of champagne, he forgot other things that had come to him on equally good authority, he was hardly to be blamed. We all do that, more or less, in unfolding our plans, and Barrifield was uncommonly optimistic.

He had begun as he served the roast. Previous to this, as is the habit in bohemia, they had been denouncing publishers and discussing work finished, in hand, and still to do; also the prices and competition for their labors....