The Boys' Life of Mark Twain 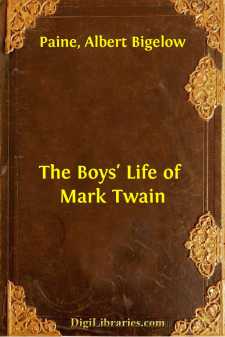 THE FAMILY OF JOHN CLEMENS

A long time ago, back in the early years of another century, a family named Clemens moved from eastern Tennessee to eastern Missouri—from a small, unheard-of place called Pall Mall, on Wolf River, to an equally small and unknown place called Florida, on a tiny river named the Salt.

That was a far journey, in those days, for railway trains in 1835 had not reached the South and West, and John Clemens and his family traveled in an old two-horse barouche, with two extra riding-horses, on one of which rode the eldest child, Orion Clemens, a boy of ten, and on the other Jennie, a slave girl.

In the carriage with the parents were three other children—Pamela and Margaret, aged eight and five, and little Benjamin, three years old. The time was spring, the period of the Old South, and, while these youngsters did not realize that they were passing through a sort of Golden Age, they must have enjoyed the weeks of leisurely journeying toward what was then the Far West—the Promised Land.

The Clemens fortunes had been poor in Tennessee. John Marshall Clemens, the father, was a lawyer, a man of education; but he was a dreamer, too, full of schemes that usually failed. Born in Virginia, he had grown up in Kentucky, and married there Jane Lampton, of Columbia, a descendant of the English Lamptons and the belle of her region. They had left Kentucky for Tennessee, drifting from one small town to another that was always smaller, and with dwindling law-practice John Clemens in time had been obliged to open a poor little store, which in the end had failed to pay. Jennie was the last of several slaves he had inherited from his Virginia ancestors. Besides Jennie, his fortune now consisted of the horses and barouche, a very limited supply of money, and a large, unsalable tract of east Tennessee land, which John Clemens dreamed would one day bring his children fortune.

Readers of the "Gilded Age" will remember the journey of the Hawkins family from the "Knobs" of Tennessee to Missouri and the important part in that story played by the Tennessee land. Mark Twain wrote those chapters, and while they are not history, but fiction, they are based upon fact, and the picture they present of family hardship and struggle is not overdrawn. The character of Colonel Sellers, who gave the Hawkinses a grand welcome to the new home, was also real. In life he was James Lampton, cousin to Mrs. Clemens, a gentle and radiant merchant of dreams, who believed himself heir to an English earldom and was always on the verge of colossal fortune. With others of the Lampton kin, he was already settled in Missouri and had written back glowing accounts; though perhaps not more glowing than those which had come from another relative, John Quarles, brother-in-law to Mrs. Clemens, a jovial, whole-hearted optimist, well-loved by all who knew him.

It was a June evening when the Clemens family, with the barouche and the two outriders, finally arrived in Florida, and the place, no doubt, seemed attractive enough then, however it may have appeared later....