The Boy Who Knew What The Birds Said 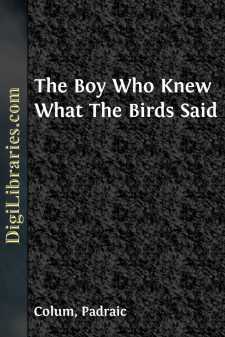 How He Came to KnowWhat the Birds Said

There is one thing that all the Birds are afraid of, and that is the thing that will happen when the Bird That Follows the Cuckoo flies into the Cuckoo's mouth.

And what will happen then, asks my kind foster-child.

When the Bird that Follows the Cuckoo flies into the Cuckoo's mouth the World will come to an end.

All the Birds know that, but not all the People know it.

Well, one day the Cuckoo was sitting on a bush and her Mouth was open. The Bird That Follows the Cuckoo flew straight at it. And into it he must have flown only for the Boy....

The Bird That Follows the Cuckoo flew into the Crow's mouth instead, and the Crow gave that bird a squeeze, I can tell you. The Cuckoo pushed off the Boy's cap with her wings and flew into the forest.

All the Birds of the King's Garden were there at the time. There were—

All the Birds in the King's Garden were overjoyed that the Bird that Follows the Cuckoo did not get into the Cuckoo's Mouth.

"What shall we do for the Boy who prevented the World from coming to an End?" asked the good-natured Corncrake. She was there too, but I forgot to mention her.

"I'll sing for him," said the Goldfinch.

"I'll teach him what the Birds say," said the Crow.

"If he knew the Language of the Birds he would be like King Solomon," said the Raven.

"Let us make him like King Solomon," said the Goldfinch.

"Yes, yes, yes," said all the Birds in the King's Garden.

The Boy had not gone far when the Crow flew after him and lighted on his shoulder. The Crow spoke to him in the Boy's own language. The Boy was surprised. The Crow flew to a standing stone and went on speaking plain words to him.

"Why shouldn't I know how to speak," said the Crow, "haven't I, for a hundred years and more, been watching men and listening to their words? Why shouldn't I be able to speak?"

"And you can speak well, ma'am," said the Boy, not forgetting his manners.

"You know one language, but I know many languages," said the Crow, "for I know what People say, and I know what all the Birds say."

The old Crow sat there looking so wise and so friendly that the Boy began to talk to her at his ease. And after a while the Boy said, "Ma'am, do you think I could ever learn what the Birds say?"

"You would, if you had me to teach you," said the Crow.

Then every day after that the Crow would sit upon the Standing Stone and the Boy would stand beside it. When the Crow had eaten the boiled potato that the Boy always brought she would tell him about the languages of the different Birds....