The Boy Scouts on the Trail 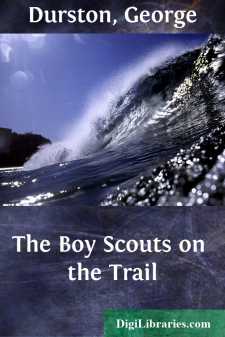 CHAPTER I PLANS FOR THE HOLIDAYS

"Where are you going to spend the holidays, Frank?"

The speaker was Henri Martin, a French boy of the new type that has sprung up in France since games like football and tennis began to be generally encouraged. He asked the question of his schoolmate, Frank Barnes, son of a French mother and an American father. Frank's name was really Francois; his mother had that much to do with his naming. But he was a typical American boy, none the less, and there was a sharp contrast between his sturdy frame and that of the slighter French boy who had become his best chum in the school both were attending near Paris, at St. Denis.

"I don't really know, Harry," said Frank. "Not exactly, that is. My Uncle Dick is coming over a little later, and I think we'll go to Switzerland." His face clouded a little. "I—I haven't any real home to go to, you know. My father and mother—"

"I know—I know, mon vieux," said Henri, with the quick sympathy of his race. "But until your uncle comes—what then, hein?"

"Why, I'm to wait for him here, at the school," said Frank. "He's a very busy man, you know, and it's hard for him to get away just any time he wants to. He will get here, though, early in August, I think."

"But that won't do at all, Frank!" exclaimed Harry, impulsively. Like many French boys, he spoke English perfectly and with practically no trace of an accent. "To spend a week or two weeks here in the school, all alone! No—I tell you what! I've an idea!"

"What is it?" asked Frank, a little amused at the horror with which his friend heard of the notion of staying in school after the holidays had begun.

"Why, come home with me until your uncle comes!" said Harry. "That's what you must do. I live not so far away—not so very far. At Amiens. You have heard of it? Oh, we will have fine times, you and I. I am to join the Boy Scouts Francais these holidays!"

He called it Boy Scoots, and Frank roared. The word scout had been retained, without translation, when the French adopted the Boy Scout movement from England, just as words like rosbif, football, and le sport had been adopted into the language. But all these words, or nearly all, have been given a French pronunciation, which give them a strange sound in Anglo-Saxon ears.

"Excuse me, Harry," said Frank, in a moment. "I didn't mean to laugh, but it does sound funny."

"Of course it does, Frank," said Henri, generously. "I speak English, so I can see that. But there's nothing funny about the thing, let me tell you. We began by calling the Boy Scouts Eclaireurs Francais, but General Baden-Powell didn't like it, so we made the change. Really, we're a good deal like the English and American scouts. We have the same oath—we call it serment, of course, and our manual is just a translation of the English one."

"I was going to join in America, too," said Frank. "But then I came over here, and I didn't know there were scouts here. Do you wear the same sort of uniforms?"

"Yes—just like the English," said Harry. "You could join with me, couldn't you? You're going to be here for a whole year more, aren't you?"

"Yes. My mother"—he gulped a little at the word—"wanted me to know all about France, and never to forget that I had French blood in me, you see. My French grandfather was killed by the Germans at Gravelotte—he was a colonel of the line. And my mother, even though my father was an American, was always devoted to France."

"We are like that—we French," said Harry, simply. Into his eyes came the look that even French boys have when they remember the days of 1870. "The Germans—yes, they beat us then. We were not ready—we were badly led....