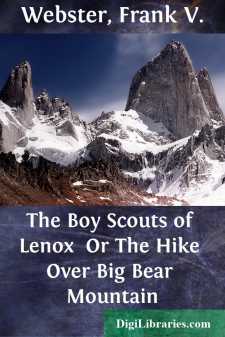 CHAPTER I WHEN THE SEED TOOK ROOT

“It strikes me as a cracking good idea, all right, and I’m glad Tom stirred us up after he came back from visiting his cousins over in Freeport!”

“He says they’ve got a dandy troop, with three full patrols, over there.”

“No reason, Felix, why Lenox should be left out in the cold when it comes to Boy Scout activities. Let’s keep the ball rolling until it’s a sure thing.”

“I say the same, Josh. Why, we can count about enough noses for a full patrol right among ourselves. There’s Tom Chesney to begin with; George Cooper here, who ought to make a pretty fair scout even if he is always finding fault; Carl Oskamp, also present, if we can only tear him away from his hobby of raising homing pigeons long enough to study up what scouts have to know; yourself, Josh Kingsley; and a fellow by the name of Felix Robbins, which happens to be me.”

“That’s five to begin with; and I might mention Billy Button; yes, and Walter Douglass, though I guess he’d take the premium for a tenderfoot, because he knows next to nothing about outdoor life.”

“But he’s willing to learn, because he told me so, Josh; and that counts a lot, you know. That makes seven doesn’t it? Well, to complete the roster of the patrol we might coax Horace Herkimer Crapsey to cast in his lot with us!”

The boy named Josh laughed uproariously at the suggestion, and his merriment was shared to some extent by the other two, Carl Oskamp and George Cooper. Felix shook his head at them disapprovingly.

“Just go slow there, fellows,” he told them. “Because Horace has always been so afraid of his soft white hands that he wears gloves most of the time isn’t any reason why he shouldn’t be made to see the error of his ways.”

“Oh! Felix means that if only we can coax Horace to join, we might reform him!” exclaimed Josh, who was a thin and tall boy, with what might be called a hatchet face, typically Yankee.

“By the same token,” chuckled Felix in turn, “a few of us might drop some of our bad habits if once we subscribed to the rules of the scouts, because I’ve read the same in a newspaper. They rub it into fellows who find fault with things instead of being cheerful.”

“Oh! is that so, Felix?” burst out George Cooper, who took that thrust to himself. “How about others who are lazy, and always wanting to put things off to another day? Do those same rules say ‘procrastination is the thief of time?’”

“Well boys,” remarked Carl Oskamp, pouring oil on the troubled water as was his habit, “we’ve all got our faults, and it might be a good thing if joining the scouts made us change our ways more or less. There comes Tom, now, let’s get him to tell us something more about the chance for starting a troop in Lenox right away.”

“He said he believed he knew a young man who might consent to act as scout master,” observed Felix. “It’s Mr. Robert Witherspoon, the civil engineer and surveyor.”

“Why, yes, I believe he used to be a scout master in the town he came from!” declared Carl. “I hope Tom is bringing us some good news right now.”

“If that look on his face counts for anything, he’s going to give us a chance to let out a few cheers,” asserted Felix, as the fifth boy drew near.

It was a Friday afternoon near the close of winter when this conversation took place. School was over for the week, and as there was an unmistakable feeling of coming spring in the air the snow on the ground seemed to be in haste to melt and disappear.

Every now and then one of the boys would be overcome by an irresistible temptation to stoop, gather up enough of the soft clinging snow to make a hard ball, which was thrown with more or less success at some tree or other object.

The town of Lenox was just one of many in the eastern section of the great United States, and boasted a few thousand inhabitants, some industries, a high school, and various churches....