The Boy Scout Camera Club, or, the Confession of a Photograph 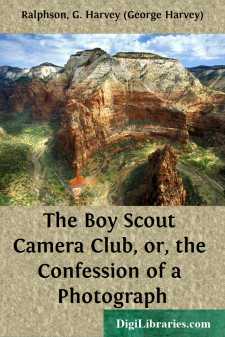 CHAPTER I LOST: A FOREIGN PRINCE!

"Quite a mixture of wild creatures to be found in a splendid clubroom in the city of New York!" exclaimed Ned Nestor, a handsome, muscular boy of seventeen. "How many of these denizens of the forests are ready to join the Boy Scout Camera Club?"

"You may put my name down twice—in red ink!" shouted Jimmie McGraw, of the Wolf Patrol. "I wouldn't miss it to be president of the United States!"

"One Wolf," Ned said, writing the name down.

"Two Wolves!" cried Jimmie, red-headed, freckled of face and as active as a red squirrel, "two wolves! You're a Wolf yourself, Ned Nestor!"

"Two Wolves, then!" laughed Ned. "Of course Jimmie and I can form a club all by ourselves, and he can be the officers and I can be the members, but we'd rather have a menagerie of large size, as we are going into the mountains of Virginia, West Virginia, North Carolina, Kentucky and Tennessee."

The boys who had not yet spoken were on their feet in an instant, all clamoring for membership in the Boy Scout Camera Club. Ned lifted a hand for silence.

"Why this present rush?" he asked. "I've been thinking that Jimmie and I would have to go to the mountains alone! Why this impetuosity?"

"The mountains!" shouted Frank Shaw, of the Black Bear Patrol. "It is the mountains that get us! We've been thinking that the club you were organizing wouldn't get outside of little old New York, but would loaf around taking snap-shots of the slums and the trees in the parks. But when you mention mountains, why—"

"I'm going right down stairs and pack my camera!" Jack Bosworth, of the Black Bear Patrol, declared. "When it comes to mountains!"

The clubroom of the Black Bear Patrol was on the top floor of the handsome residence of Jack's father, who was a famous corporation lawyer, and the boys persuaded Jack to wait until they had completed the organization of the Camera Club before he started in packing for the journey to the mountains!

"You'll want an Eagle, if you're going to the mountains!" shouted Teddy Green, of the Eagle Patrol. "I'll fly home and get my wardrobe right now!"

Teddy Green was the son of a Harvard professor, and was inclined to follow in the footsteps of his father in the matter of learning— after he had first climbed to all the high spots of the world and descended into all the low ones! He insisted on exploring the earth before he learned by rote what others had written about it!

"And a Bull Moose!" yelled Oliver Yentsch, of the Moose Patrol."You've got to have a Moose along with you!"

Oliver was the son of a ship builder, and had a launch and a yacht of his own. He was liked by all his associates in spite of his tendency to grumble at trifles. However, if he complained at small things, he met large troubles with a smile on his bright face. He now seized Teddy about the waist and waltzed around the room with him.