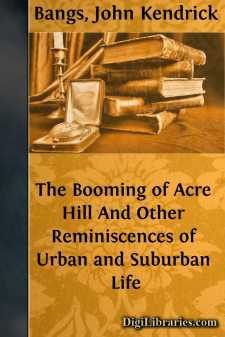 THE BOOMING OF ACRE HILL

Acre Hill ten years ago was as void of houses as the primeval forest. Indeed, in many ways it suggested the primeval forest. Then the Acre Hill Land Improvement Company sprang up in a night, and before the bewildered owners of its lovely solitudes and restful glades, who had been paying taxes on their property for many years, quite grasped the situation they found that they had sold out, and that their old-time paradise was as surely lost to them as was Eden to Adam and Eve.

To-day Acre Hill is gridironed with macadamized streets that are lined with houses of an architecture of various degrees of badness. Where birds once sang, and squirrels gambolled, and stray foxes lurked, the morning hours are made musical by the voices of milkmen, and the squirrels have given place to children and nurse-maids. Where sturdy oaks stood like sentinels guarding the forest folk from intrusion from the outside world now stand tall wooden poles with glaring white electric lights streaming from their tops. And the soughing of the winds in the trees has given place to the clang of the bounding trolley. All this is the work of the Acre Hill Land Improvement Company.

Yet if, as I have said, the Acre Hill Land Improvement Company sprang up in a night, it passed many sleepless nights before it received the rewards which come to him who destroys Nature. And when I speak of a corporation passing sleepless nights I do so advisedly, for at the beginning of its career the Acre Hill Land Improvement Company consisted of one man—a mild-mannered man who had previously labored in similar enterprises, and whose name was called blessed in a thousand uncomfortable houses in uncomfortable suburbs elsewhere, that, like Acre Hill, had once been garden spots, but had been "improved." Even a professional improver of land finds sleep difficult to woo at the beginning of such an enterprise. In the first instance, when one buys land, giving a mortgage in full payment therefor, with the land as security, one appears to have assumed a moderately heavy burden. Then, when to this one adds the enormous expense of cutting streets through the most beautiful of the sylvan glades, the building of sewers, and the erection of sample houses, to say nothing of the strain upon the intellect in the selection of names for the streets and lanes and circles that spring into being, one cannot but wonder how the master mind behind it all manages to survive.

But the Acre Hill Land Improvement Company did survive, and Dumfries Corners watched its progress with much interest. Regrets were expressed when some historic knoll was levelled in order to provide a nice flat space for a public square. Youngsters who had bagged many a partridge on Acre Hill felt like weeping when one stretch of bush after another was cut ruthlessly away in order that a pretentious-looking structure, the new home of the Acre Hill Country Club, might be erected. Lovers sighed when certain noble old oaks fraught with sentimental associations fell before the unsentimental axes of the Improvement Company; and numberless young Waltons muttered imprecations upon the corporation that filled in with stone and ashes the dear old pond that once gave forth fish in great abundance, and through earthen pipes diverted the running brook, that hitherto had kept it full, into a brand-new sewer....