The Books of the New Testament 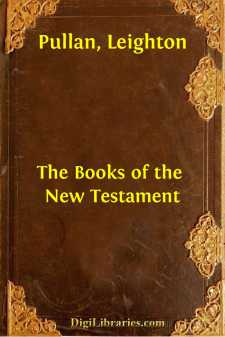 After the gift of the Holy Spirit Himself, we may justly reckon the New Testament as the most precious gift which our Lord Jesus Christ has given since His Ascension to those who believe on His Name. The word "testament," which is in Latin testamentum, corresponds with our word "covenant," and the phrase "New Testament" signifies the record of that new covenant in which God bound man to Himself by the death of His Son. The truth that this was a new covenant, distinct from the covenant which God made with Abraham, was taught by our Lord when He instituted the memorial of His death and said, "This cup is the new covenant in My Blood." We do not know precisely at what date the Christians began to call this record "the New Testament," but we do know that they used this name before A.D. 200.

In the time of our Lord the popular language of Palestine was Aramaic, a language which was akin to Hebrew and borrowed some words from Hebrew. Hebrew was known by learned people, but the language which the Son of God learned from His blessed mother and His foster father was Aramaic, and He spoke the Galilean dialect of that language. From a few words preserved in the Gospels, it is plain that the gospel was first preached in that tongue. In the 7th century after Christ, the Mohammedan conquerors, who spoke Arabic, began to supplant {2} Aramaic by Arabic, and this is now the ordinary language of Palestine. As many people who spoke Aramaic were at one time heathen, both the Jews and the Christians adopted the habit of calling their language Syriac rather than Aramaic. The great centre of Christian Syriac literature was Edessa, and in the eastern part of the Roman Empire Syriac was the most important and most elegant language next to Greek. It is still used in the Church services of many Oriental Christians, and it is spoken in ordinary conversation in parts of North Mesopotamia and Kurdistan. Further west it is only spoken in a few villages of Anti-Libanus. In the course of this book it will be necessary to refer occasionally to the Aramaic language.

It is highly probable that some of the earliest Christian writings were in Aramaic, but all the books of the New Testament which we now possess are in Greek. The Greek language was known by many people in Palestine, and it was splendidly fitted to be the medium of God's revelation. It was widely known among the civilized nations of the time, and it is so rich and expressive that religious ideas are better conveyed in Greek than in almost any other tongue. Whereas it was essential that the gospel should be preached first in Aramaic, it was equally essential that it should be written in Greek, for the benefit of people who did not live in Palestine or who lived there as strangers.

The New Testament Scriptures consist of twenty-seven different books, written by nine different authors. Each book has some special characteristics corresponding with the mind of the writer and the circumstances under which it was written....