The Book of This and That 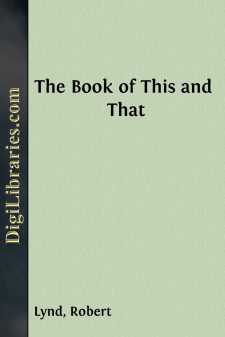 Suspicion is a beast with a thousand eyes, but most of them are blind, or colour-blind, or askew, or rolling, or yellow. It is a beast with a thousand ears, but most of them are like the ears of the deaf man in the comic recitation who, when you say "whiskers" hears "solicitors," and when you are talking about the weather thinks you are threatening to murder him. It is a beast with a thousand tongues, and they are all slanderous. On the whole, it is the most loathsome monster outside the pages of The Faërie Queene. Just as the ugliest ape that ever was born is all the more repellent for being so like a man, so suspicion is all the more hideous because it is so close a caricature of the passion for truth. It is a leering perversion of that passion which sent Columbus looking for a lost continent and urged Galileo to turn his telescope on the heavens. Columbus may, in a sense, be said to have suspected that America was there, and Galileo suspected more than was good for his comfort about the conduct of the stars. But these were noble suspicions—leaps into the light. They are no more comparable to the suspicions which are becoming a feature of public life than the energies of an explorer of the South Pole are comparable to the energies of one of those private detectives who are paid to grub after evidence in divorce cases. One might put it a good deal more strongly, indeed, for the private detective may in his own way be an officer of truth and humanity, while the suspicious politician is the prophet only of party disreputableness. He is like the average suspicious husband, in the case of whom, even when his suspicions are true, one is inclined to sympathise with the wife for being married to so green-eyed a fool. Suspicion, take it all in all, is the most tedious and scrannel of the sins.

It would be folly, of course, to suggest that there is no such thing as justifiable suspicion. If you see a man in a Tube lift with his hand on some old gentleman's watch-chain, you are justified in suspecting that his object is something less innocent than to persuade the old gentleman to become a Plymouth Brother. But the man of suspicious temperament is not content with cases of this sort. He is the sort of man who, if it were not for the law of libel, would suspect the Rev. F. B. Meyer of having stolen La Gioconda from the Louvre.

His suspicions are like those of a man who would accost you in the street with the assertion that you had just murdered the President of the United States or that you were hiding a stolen Dreadnought in your pocket. Obviously there would be no reply to a man like this, except that he was mad. He has got an idea into his head, and it is his idea, and not the proof or disproof that the idea has any justification, which seems to him to be the most important thing in the world. Suspicion, indeed, is a well-known form of mania. Husbands suspect their wives of trying to poison their beer; friends suspect friends of planning the most extraordinary series of losses and humiliations for them....