The Book of the Dead 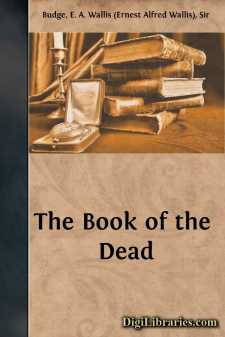 "Book of the Dead" is the title now commonly given to the great collection of funerary texts which the ancient Egyptian scribes composed for the benefit of the dead. These consist of spells and incantations, hymns and litanies, magical formulae and names, words of power and prayers, and they are found cut or painted on walls of pyramids and tombs, and painted on coffins and sarcophagi and rolls of papyri. The title "Book of the Dead" is somewhat unsatisfactory and misleading, for the texts neither form a connected work nor belong to one period; they are miscellaneous in character, and tell us nothing about the lives and works of the dead with whom they were buried. Moreover, the Egyptians possessed many funerary works that might rightly be called "Books of the Dead," but none of them bore a name that could be translated by the title "Book of the Dead." This title was given to the great collection of funerary texts in the first quarter of the nineteenth century by the pioneer Egyptologists, who possessed no exact knowledge of their contents. They were familiar with the rolls of papyrus inscribed in the hieroglyphic and the hieratic character, for copies of several had been published, [1] but the texts in them were short and fragmentary. The publication of the Facsimile [2] of the Papyrus of Peta-Amen-neb-nest-taui [3] by M. Cadet in 1805 made a long hieroglyphic text and numerous coloured vignettes available for study, and the French Egyptologists described it as a copy of the "Rituel Funéraire" of the ancient Egyptians. Among these was Champollion le Jeune, but later, on his return from Egypt, he and others called it "Le Livre des Morts," "The Book of the Dead," "Das Todtenbuch," etc. These titles are merely translations of the name given by the Egyptian tomb-robbers to every roll of inscribed papyrus which they found with mummies, namely, "Kitâb-al-Mayyit," "Book of the dead man," or "Kitâb al-Mayyitun," "Book of the dead" (plur.). These men knew nothing of the contents of such a roll, and all they meant to say was that it was "a dead man's book," and that it was found in his coffin with him.

The Preservation of the Mummified Body in the Tomb by Thoth.

The objects found in the graves of the predynastic Egyptians, i.e., vessels of food, flint knives and other weapons, etc., prove that these early dwellers in the Nile Valley believed in some kind of a future existence. But as the art of writing was, unknown to them their graves contain no inscriptions, and we can only infer from texts of the dynastic period what their ideas about the Other World were. It is clear that they did not consider it of great importance to preserve the dead body in as complete and perfect state as possible, for in many of their graves the heads, hands and feet have been found severed from the trunks and lying at some distance from them. On the other hand, the dynastic Egyptians, either as the result of a difference in religious belief, or under the influence of invaders who had settled in their country, attached supreme importance to the preservation and integrity of the dead body, and they adopted every means known to them to prevent its dismemberment and decay....