The Book of Mormon

by Church of Jesus Christ of Latter-day Saints 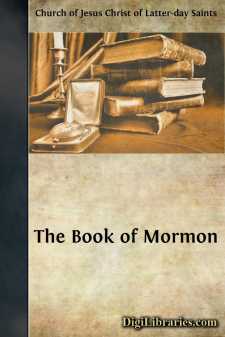 THE FIRST BOOK OF NEPHI HIS REIGN AND MINISTRY (1 Nephi)

An account of Lehi and his wife Sariah and his four sons, being called, (beginning at the eldest) Laman, Lemuel, Sam, and Nephi. The Lord warns Lehi to depart out of the land of Jerusalem, because he prophesieth unto the people concerning their iniquity and they seek to destroy his life. He taketh three days' journey into the wilderness with his family. Nephi taketh his brethren and returneth to the land of Jerusalem after the record of the Jews. The account of their sufferings. They take the daughters of Ishmael to wife. They take their families and depart into the wilderness. Their sufferings and afflictions in the wilderness. The course of their travels. They come to the large waters. Nephi's brethren rebel against him. He confoundeth them, and buildeth a ship. They call the name of the place Bountiful. They cross the large waters into the promised land, and so forth. This is according to the account of Nephi; or in other words, I, Nephi, wrote this record.

1 Nephi 1:11 I, Nephi, having been born of goodly parents, therefore I wastaught somewhat in all the learning of my father; and having seenmany afflictions in the course of my days, nevertheless, havingbeen highly favored of the Lord in all my days; yea, having had agreat knowledge of the goodness and the mysteries of God,therefore I make a record of my proceedings in my days. 1 Nephi 1:22 Yea, I make a record in the language of my father, whichconsists of the learning of the Jews and the language of theEgyptians. 1 Nephi 1:33 And I know that the record which I make is true; and I make itwith mine own hand; and I make it according to my knowledge. 1 Nephi 1:44 For it came to pass in the commencement of the first year ofthe reign of Zedekiah, king of Judah, (my father, Lehi, havingdwelt at Jerusalem in all his days); and in that same year therecame many prophets, prophesying unto the people that they mustrepent, or the great city Jerusalem must be destroyed. 1 Nephi 1:55 Wherefore it came to pass that my father, Lehi, as he wentforth prayed unto the Lord, yea, even with all his heart, inbehalf of his people. 1 Nephi 1:66 And it came to pass as he prayed unto the Lord, there came apillar of fire and dwelt upon a rock before him; and he saw andheard much; and because of the things which he saw and heard hedid quake and tremble exceedingly. 1 Nephi 1:77 And it came to pass that he returned to his own house atJerusalem; and he cast himself upon his bed, being overcome withthe Spirit and the things which he had seen. 1 Nephi 1:88 And being thus overcome with the Spirit, he was carried awayin a vision, even that he saw the heavens open, and he thought hesaw God sitting upon his throne, surrounded with numberlessconcourses of angels in the attitude of singing and praisingtheir God. 1 Nephi 1:99 And it came to pass that he saw One descending out of themidst of heaven, and he beheld that his luster was above that ofthe sun at noon-day....
Show more
Show less