The Bishop of Cottontown A Story of the Southern Cotton Mills 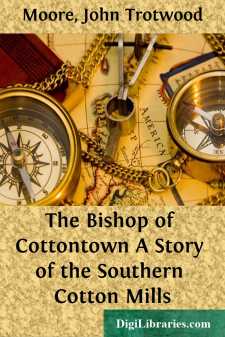 The cotton blossom is the only flower that is born in the shuttle of a sunbeam and dies in a loom.

It is the most beautiful flower that grows, and needs only to become rare to be priceless—only to die to be idealized.

For the world worships that which it hopes to attain, and our ideals are those things just out of our reach.

Satiety has ten points and possession is nine of them.

If, in early August, the delicately green leaves of this most aristocratic of all plants, instead of covering acres of Southland shimmering under a throbbing sun, peeped daintily out, from among the well-kept beds of some noble garden, men would flock to see that plant, which, of all plants, looks most like a miniature tree.

A stout-hearted plant,—a tree, dwarfed, but losing not its dignity.

Then, one morning, with the earliest sunrise, and born of it, there emerges from the scalloped sea-shell of the bough an exquisite, pendulous, cream-white blossom, clasping in its center a golden yellow star, pinked with dawn points of light, and, setting high up under its sky of milk-white petals flanked with yellow stars, it seems to the little nestling field-wrens born beneath it to be the miniature arch of daybreak, ere the great eye of the morning star closes.

Later, when the sun rises and the sky above grows pink and purple, it, too, changes its color from pink to purple, copying the sky from zone to zone, from blue to deeper blue, until, at late evening the young nestlings may look up and say, in their bird language: “It is twilight.”

What other flower among them can thus copy Nature, the great master?

Under every sky is a sphere, and under this sky picture, when night falls and closes it, a sphere is born. And in that sphere is all of earth.

Its oils and its minerals are there, and one day, becoming too full of richness, it bursts, and throws open a five-roomed granary, stored with richer fabric than ever came from the shuttles of Fez and holding globes of oil such as the olives of Hebron dreamed not of.

And in that fabric is the world clothed.

Oh, little loom of the cotton-plant, poet that can show us the sky, painter that paints it, artisan that reaches out, and, from the skein of a sunbeam, the loom of the air and the white of its own soul, weaves the cloth that clothes the world!

From dawn and darkness building a loom. From sunlight and shadow weaving threads of such fineness that the spider's were ropes of sand and the hoar frost's but clumsy icicles.

Weaving—weaving—weaving them. And the delicately patterned tapestry of ever-changing clouds forming patterns of a fabric, white as the snow of the centuries, determined that since it has to make the garments of men, it will make them unsullied.

It is true to Nature to the last. The summer wanes and the winter comes, and when the cotton sphere bursts, 'tis a ball of snow, but a dazzling white, spidery snow, which warms and does not chill, brings comfort and not care, wealth and the rich warm blood, and not the pinches of poverty....