The Bishop and Other Stories 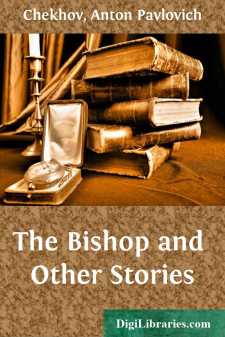 THE evening service was being celebrated on the eve of Palm Sunday in the Old Petrovsky Convent. When they began distributing the palm it was close upon ten o'clock, the candles were burning dimly, the wicks wanted snuffing; it was all in a sort of mist. In the twilight of the church the crowd seemed heaving like the sea, and to Bishop Pyotr, who had been unwell for the last three days, it seemed that all the faces—old and young, men's and women's—were alike, that everyone who came up for the palm had the same expression in his eyes. In the mist he could not see the doors; the crowd kept moving and looked as though there were no end to it. The female choir was singing, a nun was reading the prayers for the day.

How stifling, how hot it was! How long the service went on! Bishop Pyotr was tired. His breathing was laboured and rapid, his throat was parched, his shoulders ached with weariness, his legs were trembling. And it disturbed him unpleasantly when a religious maniac uttered occasional shrieks in the gallery. And then all of a sudden, as though in a dream or delirium, it seemed to the bishop as though his own mother Marya Timofyevna, whom he had not seen for nine years, or some old woman just like his mother, came up to him out of the crowd, and, after taking a palm branch from him, walked away looking at him all the while good-humouredly with a kind, joyful smile until she was lost in the crowd. And for some reason tears flowed down his face. There was peace in his heart, everything was well, yet he kept gazing fixedly towards the left choir, where the prayers were being read, where in the dusk of evening you could not recognize anyone, and—wept. Tears glistened on his face and on his beard. Here someone close at hand was weeping, then someone else farther away, then others and still others, and little by little the church was filled with soft weeping. And a little later, within five minutes, the nuns' choir was singing; no one was weeping and everything was as before.

Soon the service was over. When the bishop got into his carriage to drive home, the gay, melodious chime of the heavy, costly bells was filling the whole garden in the moonlight. The white walls, the white crosses on the tombs, the white birch-trees and black shadows, and the far-away moon in the sky exactly over the convent, seemed now living their own life, apart and incomprehensible, yet very near to man. It was the beginning of April, and after the warm spring day it turned cool; there was a faint touch of frost, and the breath of spring could be felt in the soft, chilly air. The road from the convent to the town was sandy, the horses had to go at a walking pace, and on both sides of the carriage in the brilliant, peaceful moonlight there were people trudging along home from church through the sand. And all was silent, sunk in thought; everything around seemed kindly, youthful, akin, everything—trees and sky and even the moon, and one longed to think that so it would be always....