The Birth-Time of the World and Other Scientific Essays 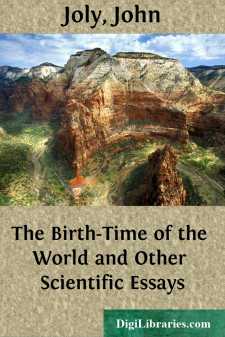 Tins volume contains twelve essays written at various timesduring recent years. Many of them are studies contributed toScientific Reviews or delivered as popular lectures. Some areexpositions of views the scientific basis of which may beregarded as established. Others—the greater number—may bedescribed as attempting the solution of problems which cannot beapproached by direct observation.

The essay on The Birth-time of the World is based on a lecturedelivered before the Royal Dublin Society. The subject hasattracted much attention within recent years. The age of theEarth is, indeed, of primary importance in our conception of thelongevity of planetary systems. The essay deals with theevidence, derived from the investigation of purely terrestrialphenomena, as to the period which has elapsed since the oceancondensed upon the Earth's surface. Dr. Decker's recent additionto the subject appeared too late for inclusion in it. He findsthat the movements (termed isostatic) which geologists recogniseas taking place deep in the Earth's crust, indicate an age of thesame order of magnitude

as that which is inferred from the statistics of denudativehistory.[1]

The subject of _Denudation_ naturally arises from the first essay.In thinking over the method of finding the age of the ocean bythe accumulation of sodium therein, I perceived so long ago as1899, when my first paper was published, that this methodafforded a means of ascertaining the grand total of denudativework effected on the Earth's surface since the beginning ofgeological time; the resulting knowledge in no way involving anyassumption as to the duration of the period comprising thedenudative actions. This idea has been elaborated in variouspublications since then, both by myself and by others."Denudation," while including a survey of the subject generally,is mainly a popular account of this method and its results. Itcloses with a reference to the fascinating problems presented bythe inner nature of sedimentation: a branch of science to which Iendeavoured to contribute some years ago.

_Mountain Genesis_ first brings in the subject of the geologicalintervention of radioactivity. There can, I believe, be no doubtas to the influence of transforming elements upon thedevelopments of the surface features of the Earth; and, if I amright, this source of thermal energy is mainly responsible forthat local accumulation of wrinkling which we term mountainchains. The

paper on _Alpine Structure_ is a reprint from "Radioactivity andGeology," which for the sake of completeness is here included. Itis directed to the elucidation of a detail of mountain genesis: adetail which enters into recent theories of Alpine development.The weakness of the theory of the "horst" is manifest, however,in many of its other applications; if not, indeed, in all.

The foregoing essays on the physical influences affecting thesurface features of the Earth are accompanied by one entitled _TheAbundance of Life._ This originated amidst the overwhelmingpresentation of life which confronts us in the Swiss Alps....