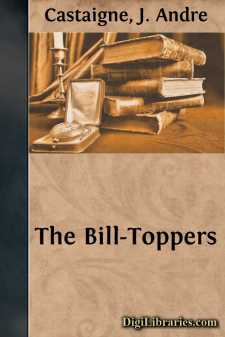 All around stretched the great blue sky and the blue sea of the Gulf of Bengal.

Mrs. Clifton lay dozing at full length on a pillowed bench and her husband sat near her and followed his Lily, his daughter, with his eyes: his Lily, eight years old, “that high,” waving among the passengers the white coral necklace which Pa had bought her on leaving Australia; his Lily, his star, his New Zealander on Wheels! His Lily who had had such successes at Melbourne, at Sidney: bouquets, tons and cart-loads of bouquets! And the past would be nothing compared with the future, with the astounding tricks which he was inventing for his Lily. The mere sight of her raised his enthusiasm to boiling-point. And he was going to show them, in Calcutta and elsewhere, if they knew how to make stars in New Zealand or if they were only fit for raising mutton.

Clifton was an artist, an “artiste,” a born artiste: starting as a mere clerk in an office, he had become an amateur cyclist and then a professional on the track. He married an Englishwoman at Wellington and, at Lily’s birth, decided upon a career: the stage, with Lily for a star later on! And he set to work, with vim and vigor, learned a few tricks on his bike, taught his wife the business in less than no time; and Lily’s first memories as a four-year-old were:

“I was sitting on Ma’s shoulders, Ma on Pa’s and Pa on the bike.”

And Lily zigzagged through New Zealand, from east to west and north to south, and Australia after, where she received plenty of applause for her tricks, childish in themselves, but well presented. Her triumphant path wound among tinseled bottles containing paper flowers, with a faultless standstill for the climax, one hand on the handle-bar, the other blowing kisses to the audience. This procured Pa an engagement for India. He ordered a beautiful colored poster, “The Clifton Family, Trick Cyclists,” with a portrait in the corner of his own strong face and bristling mustache—“P. T. Clifton, Manager”—one more rung in the ladder of life mounted, thanks to his Lily.

And Pa smiled to his daughter and, as she ran past him, lifted her on his knee and stroked her fair curls; and the child cuddled up to her Pa, opened her lips to ask questions, but was silent, with her eyes lost in space, puckering her little forehead, in which were heaped so many mingled memories of the stage and the great world outside: the Boxing Kangaroo; tall cliffs; green islands; the bike; Batavia among the trees; Singapore, with its noise and dust. And Lily, wearily, dreamed and murmured things, while the steamer sped on, thud, thud, thud, flat as a stage in its blue “set.”

Lily’s impressions of India were months of jolting and bumping, stops in the dead of night while the tent was pitched, rains, strong smells, oppressive heats—months and months of it, Ma on Pa, Pa on the wheel and she on top, waving flags. Yellow faces on the benches, red flowers and, somewhere, on a river-bank, two eyes glittering in the dark: a tiger, somebody said!...