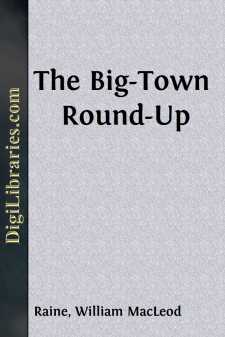 "I like yore outfit," Red Hollister grumbled. "You're nice boys, and good to yore mothers—what few of you ain't wore their gray hairs to the grave with yore frolicsome ways. You know yore business and you got a good cook. But I'm darned if I like this thing of two meals a day, one at a quarter to twelve at night and the other a quarter past twelve, also and likewise at night."

A tenderfoot might have thought that Hollister had some grounds for complaint. For weeks he had been crawling out of his blankets in the pre-dawn darkness of 3 A.M. He had sat shivering down beside a camp-fire to swallow a hurried breakfast and had swung into the saddle while night was still heavy over the land. He had ridden after cattle wild as deer and had wrestled with ladino steers till long after the stars were up. In the chill night he had eaten another meal, rolled up in his blankets, and fallen into instant heavy sleep. And five minutes later—or so at least it seemed to him—the cook had pounded on the triangle for him to get up.

None the less Red's grumbling was a pretense. He would not have been anywhere else for twice the pay. This was what he lived for.

Johnnie Green, commonly known as "the Runt," helped himself to another flank steak. He was not much of a cow-hand, but when it came to eating Johnnie was always conscientiously on the job.

"These here New Yorkers must be awful hardy," he ventured, apropos of nothing. "Seems like they're night birds for fair. Never do go to bed, far as I can make out. They tromp the streets all day and dance at them cabby-rets all night. My feet would be all wore out."

Stace Wallis grinned. "So would my pocketbook. I've heard tell how a fellow can pay as high as four or five dollars for an eat at them places."

"Nothin' to it—nothin' a-tall," pronounced Red dogmatically. Hollister always knew everything. Nothing in the heavens above or the earth below could stump him. The only trouble with his knowledge was that he knew so much that wasn't true. "Can't be did. Do you reckon any o' them New Yorkers could get away with five dollars' worth of ham and aigs? Why, the Runt here couldn't eat more'n a dollar's worth."

"Sure," assented Johnnie. It was the habit of his life to agree with the last speaker. "You're damn whistlin', Red. Why, at the Harvey House they only charge a dollar for a square, and a man couldn't get a better meal than that."

"Onct in Denver, when I went to the stock show, I blowed myself for a meal at the Cambridge Hotel that set me back one-fifty," said Slim Leroy reminiscently. "They et dinner at night."

"They did?" scoffed Johnnie. "Don't they know a fellow eats dinner at noon and supper at night?"

"I ain't noticed any dinner at noon for se-ve-real weeks," Hollister contributed.

"Some feed that," ruminated Leroy, with memories of the Cambridge Hotel still to the fore.

"With or without?" questioned Red.

"Then they stung you," pronounced Hollister....