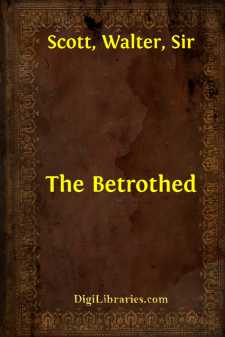 The Tales of the Crusaders was determined upon as the title of the following series of the Novels, rather by the advice of the few friends whom, death has now rendered still fewer, than by the author's own taste. Not but that he saw plainly enough the interest which might be excited by the very name of the Crusaders, but he was conscious at the same time that that interest was of a character which it might be more easy to create than to satisfy, and that by the mention of so magnificent a subject each reader might be induced to call up to his imagination a sketch so extensive and so grand that it might not be in the power of the author to fill it up, who would thus stand in the predicament of the dwarf bringing with him a standard to measure his own stature, and showing himself, therefore, says Sterne, "a dwarf more ways than one."

It is a fact, if it were worth while to examine it, that the publisher and author, however much their general interests are the same, may be said to differ so far as title pages are concerned; and it is a secret of the tale-telling art, if it could be termed a secret worth knowing, that a taking-title, as it is called, best answers the purpose of the bookseller, since it often goes far to cover his risk, and sells an edition not unfrequently before the public have well seen it. But the author ought to seek more permanent fame, and wish that his work, when its leaves are first cut open, should be at least fairly judged of. Thus many of the best novelists have been anxious to give their works such titles as render it out of the reader's power to conjecture their contents, until they should have an opportunity of reading them.

All this did not prevent the Tales of the Crusaders from being the title fixed on; and the celebrated year of projects (eighteen hundred and twenty-five) being the time of publication, an introduction was prefixed according to the humour of the day.

The first tale of the series was influenced in its structure, rather by the wish to avoid the general expectations which might be formed from the title, than to comply with any one of them, and so disappoint the rest. The story was, therefore, less an incident belonging to the Crusades, than one which was occasioned by the singular cast of mind introduced and spread wide by those memorable undertakings. The confusion among families was not the least concomitant evil of the extraordinary preponderance of this superstition. It was no unusual thing for a Crusader, returning from his long toils of war and pilgrimage, to find his family augmented by some young off-shoot, of whom the deserted matron could give no very accurate account, or perhaps to find his marriage-bed filled, and that, instead of becoming nurse to an old man, his household dame had preferred being the lady-love of a young one. Numerous are the stories of this kind told in different parts of Europe; and the returned knight or baron, according to his temper, sat down good naturedly contented with the account which his lady gave of a doubtful matter, or called in blood and fire to vindicate his honour, which, after all, had been endangered chiefly by his forsaking his household gods to seek adventures in Palestine.

Scottish tradition, quoted, I think, in some part of the Border Minstrelsy, ascribes to the clan of Tweedie, a family once stout and warlike, a descent which would not have misbecome a hero of antiquity. A baron, somewhat elderly we may suppose, had wedded a buxom young lady, and some months after their union he left her to ply the distaff alone in his old tower, among the mountains of the county of Peebles, near the sources of the Tweed. He returned after seven or eight years, no uncommon space for a pilgrimage to Palestine, and found his family had not been lonely in his absence, the lady having; been cheered by the arrival of a stranger, (of whose approach she could give the best account of any one,) who hung on her skirts, and called her mammy, and was just such as the baron would have longed to call his son, but that he could by no means make his age correspond, according to the doctrine of civilians, with his own departure for Palestine....