The Best of the World's Classics, Restricted to Prose, Vol. IX (of X) - America - I 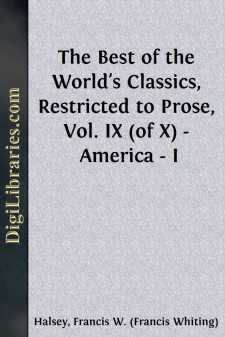 HIS STORY OF POCAHONTAS

Here more than two hundred of those grim Courtiers stood wondering at him [John Smith], as he had beene a monster; till Powhatan and his train had put themselves in their greatest braveries. Before a fire upon a seat like a bedsted, he sat covered with a great robe, made of Rarowcun skinnes, and all the tayles hanging by. On either hand did sit a young wench of 16 or 18 years, and along on each side the house, two rowes of men, and behind them as many women, with all their heads and shoulders painted red; many of their heads bedecked with the white downe of Birds; but every one with something: and a great chain of white beads about their necks.

At his entrance before the King, all the people gave a great shout. The Queene of Appamatuck was appointed to bring him water to wash his hands, and another brought him a bunch of feathers, instead of a towel to dry them. Having feasted him after their best barbarous manner they could, a long consultation was held, but the conclusion was, two great stones were brought before Powhatan: then as many as could laid hands on him, dragged him to them, and thereon laid his head, and being ready with their clubs, to beate out his braines, Pocahontas the King's dearest daughter, when no intreaty could prevaile, got his head in her armes, and laid her owne upon his to save him from death: whereat the Emperour was contented he should live to make him hatchets, and her bells, beads, and copper; for they thought him as well of all occupations as themselves. For the King himselfe will make his owne robes, shooes, bowes, arrowes, pots; plant, hunt, or doe any thing so well as the rest....

To conclude our peace, thus it happened. Captaine Argall having entered into a great acquaintance with Japazaws, an old friend of Captaine Smith's, and so to all our Nation, ever since hee discovered the Countrie: hard by him there was Pocahontas, whom Captaine Smith's Relations intituleth the Numparell of Virginia, and tho she had beene many times a preserver of him and the whole Colonie, yet till this accident shee was never seene at James towne since his departure, being at Patawomeke, as it seemes, thinking her selfe unknown, was easily by her friend Japazaws perswaded to goe abroad with him and his wife to see the ship, for Captaine Argall had promised him a Copper Kettle to bring her but to him, promising no way to hurt her, but keepe her till they could conclude a peace with her father. The Salvage for this Copper Kettle would have done any thing, it seemed by the Relation; for tho she had seene and beene in many ships, yet he caused his wife to faine how desirous she was to see one, and that he offered to beat her for her importunitie, till she wept.

But at last he told her, if Pocahontas would goe with her, he was content: and thus they betrayed the poore innocent Pocahontas aboord, where they were all kindly feasted in the cabin. Japazaws treading oft on the Captaine's foot, to remember he had done his part, the Captaine when he saw his time, perswaded Pocahontas to the gun-roome, faining to have some conference with Japazaws, which was only that she should not perceive he was any way guiltie of her captivitie: so sending for her againe, he told her before her friends, she must goe with him, and compound peace betwixt her Countrie and us, before she ever should see Powhatan, whereat the old Jew and his wife began to howle and crie as fast as Pocahontas, that upon the Captaine's fair perswasions, by degrees pacifying her selfe, and Japazaws and his wife, with the Kettle and other toys, went merrily on shore, and she to James towne....