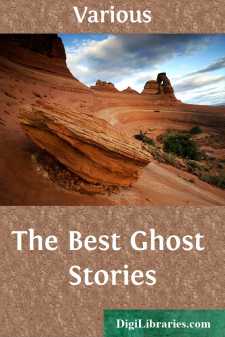 INTRODUCTION THE FASCINATION OF THE GHOSTSTORY Arthur B. Reeve

What is the fascination we feel for the mystery of the ghost story?

Is it of the same nature as the fascination which we feel for the mystery of the detective story?

Of the latter fascination, the late Paul Armstrong used to say that it was because we are all as full of crime as Sing Sing—only we don't dare.

Thus, may I ask, are we not fascinated by the ghost story because, no matter what may be the scientific or skeptical bent of our minds, in our inmost souls, secretly perhaps, we are as full of superstition as an obeah man—only we don't let it loose?

Who shall say that he is able to fling off lightly the inheritance of countless ages of superstition? Is there not a streak of superstition in us all? We laugh at the voodoo worshiper—then create our own hoodooes, our pet obsessions.

It has been said that man is incurably religious, that if all religions were blotted out, man would create a new religion.

Man is incurably fascinated by the mysterious. If all the ghost stories of the ages were blotted out, man would invent new ones.

For, do we not all stand in awe of that which we cannot explain, of that which, if it be not in our own experience, is certainly recorded in the experience of others, of that of which we know and can know nothing?

Skeptical though one may be of the occult, he must needs be interested in things that others believe to be objective—that certainly are subjectively very real to them.

The ghost story is not born of science, nor even of super-science, whatever that may be. It is not of science at all. It is of another sphere, despite all that the psychic researchers have tried to demonstrate.

There are in life two sorts of people who, for want of a better classification, I may call the psychic and the non-psychic. If I ask the psychic to close his eyes and I say to him, "Horse," he immediately visualizes a horse. The other, non-psychic, does not. I rather incline to believe that it is the former class who see ghosts, or rather some of them. The latter do not—though they share interest in them.

The artists are of the visualizing class and, in our more modern times, it is the psychic who think in motion pictures, or at least in a succession of still pictures.

However we explain the ghostly and supernatural, whether we give it objective or merely subjective reality, neither explanation prevents the non-psychic from being intensely interested in the visions of the psychic.

Thus I am convinced that if we were all quite honest with ourselves, whether we believe in or do not believe in ghosts, at least we are all deeply interested in them. There is in this interest something that makes all the world akin.

Who does not feel a suppressed start at the creaking of furniture in the dark of night? Who has not felt a shiver of goose flesh, controlled only by an effort of will? Who, in the dark, has not had the feeling of some thing behind him—and, in spite of his conscious reasoning, turned to look...?