The Belief in Immortality and the Worship of the Dead Vol. II 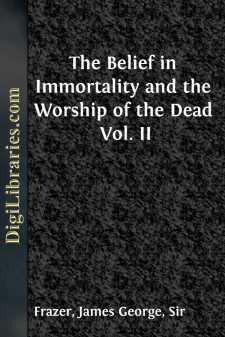 CHAPTER I THE BELIEF IN IMMORTALITY AMONG THE MAORIS § 1. The Polynesians

The Polynesians are the tall brown race of men who inhabit the widely scattered islands of the Pacific, from Hawaii on the north to New Zealand on the south, and from Tonga on the west to Easter Island on the east. Down to the eighteenth century they remained practically unknown to Europe; the first navigator to bring back comparatively full and accurate information concerning them was our great English explorer, Captain James Cook. Thus at the date of their discovery the natives were quite unaffected by European influence: of our civilisation they knew nothing: of Christianity, though it had existed in the world for nearly eighteen hundred years, they had never heard: they were totally ignorant of the metals, and had made so little progress in the arts of life that in most of the islands pottery was unknown, and even so simple an invention as that of bows and arrows for use in war had not been thought of. Hence their condition was of great interest to students of the early history of man, since it presented to their observation the spectacle of a barbaric culture evolved from an immemorial past in complete independence of those material, intellectual, and moral forces which have moulded the character of modern European nations. The lateness of their discovery may also be reckoned a fortunate circumstance for us as well as for them, since it fell at a time when scientific curiosity was fully awakened among us, and when scientific methods were sufficiently understood to allow us to study with profit a state of society which differed so widely from our own, and which in an earlier and less enlightened age might have been contemplated only with aversion and disgust.

The question of the origin of the Polynesian race is still unsettled, but the balance both of evidence and of probability seems to incline in favour of the view that the people are descended from one of the yellow Mongoloid races of South-Eastern Asia, who gradually spread eastward over the Indian Archipelago and intermingling to some extent with the black aboriginal inhabitants of the islands formed the lighter-tinted brown race which we call the Polynesian. A strong argument in favour of this theory is drawn from the Polynesian language, which belongs essentially to the same family of speech as the Melanesian and Malay languages spoken by the peoples who occupy the islands that intervene between Polynesia and the south-eastern extremity of the Asiatic continent. The black Melanesian race occupies the south-eastern portion of New Guinea and the chain of islands which stretches in a great curve round the north-eastern coasts of New Guinea and Australia. The brown Malays, with the kindred Indonesians and a small admixture of negritoes, inhabit the islands westward from New Guinea to the Malay Peninsula. Of the two kindred languages, the Polynesian and the Melanesian, the older in point of structure appears unquestionably to be the Melanesian; for it is richer both in sounds and in grammatical forms than the Polynesian, which may accordingly be regarded as its later and simplified descendant.

But whereas the three peoples, the Polynesians, the Melanesians, and the Malays speak languages belonging to the same family, their physical types are so different that it seems impossible to look on the brown straight-haired Polynesians and Malays as pure descendants of the swarthy frizzly-haired Melanesians....