The Beginning Of The Sea Story Of Australia 1901 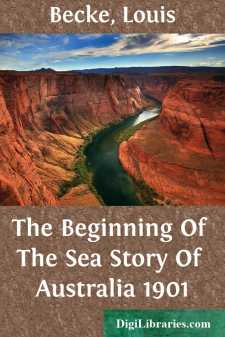 To many people in England the mention of Australia conjures pictures of tented gold-fields and tall, black-bearded, red-shirted bushrangers; of mounted police recruited from "flaxen-haired younger sons of good old English families, well-groomed and typically Anglo-Saxon"; of squatters and sheep runs; of buckjumpers ridden by the most daring riders in the world; and of much more to the same purpose; but never is presented a picture of the sea or sailor folk.

Yet the first half-century of Australian history is all to do with the ocean. The British sailor laid the foundation of the Australian nation, and, in the beginning, more than any other class, the sailorman did the colonising—and did it well. This, however, is the story of most British possessions, and generally it is gratefully remembered and the sailor duly credited and kindly thought of for his work. But in these days the dry west wind from the back blocks seems to have blown the taste of brine and the sound of the seethe of the curling "white horse" out of the mind of the native-born Australian; and the sailing day of a mail boat is the only thing that the average colonial knows or cares to know about salt water.

To write on such a subject as this, one has to leave out so much, that it is necessary to begin almost in the middle in order to reach an ending. Sea exploration and coast surveying opened the ways; whaling—it may surprise the reader, but it is nevertheless true—was once the main support of Australia and New Zealand; and runaway sailors formed a very considerable part of the back country population, such men making handier and better farm labourers, stockmen, and, later on, miners, by reason of their adaptability to strange surroundings, than ticket-of-leave men or the average free emigrant.

The first four successive Governors of Australia—in the beginning, be it remembered, the continent was one colony—were captains in the Navy. Governing in those rough days was not a mere master-of-the-ceremonies appointment, and Phillip, Hunter, King, and Bligh, if they made mistakes, considering their previous training, the populations they governed and the times in which they lived, amply justify Palmerston's words that if he wanted a thing done well in a distant part of the world; when he wanted a man with a good head, a good heart, lots of pluck, and plenty of common sense—he would always send for a captain of the Navy.

Phillip, the first of these Governors, was sent out to found "a penal settlement at Botany Bay, on the coast of New Holland," and did the work in such fashion, in spite of every discouragement from the forces of nature, the Home Government, and his own officers, as to well entitle him to a place among the builders of Greater Britain. What was known of Australia, or rather New Holland—the name of Australia was still in futurity—in 1788, when Phillip first landed on its shores?

Let us say nothing of Spanish, Portuguese, and Dutch voyages; of wrecks and piracies; of maroonings, and massacres by blacks; of the discoveries of Dampier and of Cook, but sum the whole up thus: the east coast of Australia, from its northernmost extremity to its southernmost, was practically unknown to the world, and was absolutely unknown to Englishmen until Cook's first voyage. Cook, in the Endeavour, ran along the whole east coast, entering a few bays, naming many points, and particularly describing Botany Bay where he stayed some little time; then he sailed through Torres Straits, and thence, via Batavia, home to England, where he arrived in June, 1771....