The Bee-Man of Orn and Other Fanciful Tales 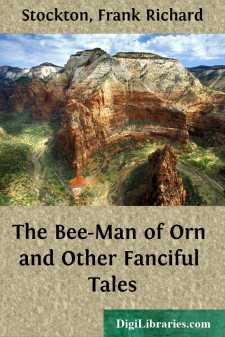 In the ancient country of Orn, there lived an old man who was called the Bee-man, because his whole time was spent in the company of bees. He lived in a small hut, which was nothing more than an immense bee-hive, for these little creatures had built their honeycombs in every corner of the one room it contained, on the shelves, under the little table, all about the rough bench on which the old man sat, and even about the head-board and along the sides of his low bed. All day the air of the room was thick with buzzing insects, but this did not interfere in any way with the old Bee-man, who walked in among them, ate his meals, and went to sleep, without the slightest fear of being stung. He had lived with the bees so long, they had become so accustomed to him, and his skin was so tough and hard, that the bees no more thought of stinging him than they would of stinging a tree or a stone. A swarm of bees had made their hive in a pocket of his old leathern doublet; and when he put on this coat to take one of his long walks in the forest in search of wild bees' nests, he was very glad to have this hive with him, for, if he did not find any wild honey, he would put his hand in his pocket and take out a piece of a comb for a luncheon. The bees in his pocket worked very industriously, and he was always certain of having something to eat with him wherever he went. He lived principally upon honey; and when he needed bread or meat, he carried some fine combs to a village not far away and bartered them for other food. He was ugly, untidy, shrivelled, and brown. He was poor, and the bees seemed to be his only friends. But, for all that, he was happy and contented; he had all the honey he wanted, and his bees, whom he considered the best company in the world, were as friendly and sociable as they could be, and seemed to increase in number every day.

One day, there stopped at the hut of the Bee-man a Junior Sorcerer. This young person, who was a student of magic, necromancy, and the kindred arts, was much interested in the Bee-man, whom he had frequently noticed in his wanderings, and he considered him an admirable subject for study. He had got a great deal of useful practice by endeavoring to find out, by the various rules and laws of sorcery, exactly why the old Bee-man did not happen to be something that he was not, and why he was what he happened to be. He had studied a long time at this matter, and had found out something.

"Do you know," he said, when the Bee-man came out of his hut, "that you have been transformed?"

"What do you mean by that?" said the other, much surprised.

"You have surely heard of animals and human beings who have been magically transformed into different kinds of creatures?"

"Yes, I have heard of these things," said the Bee-man; "but what have I been transformed from?"

"That is more than I know," said the Junior Sorcerer. "But one thing is certain—you ought to be changed back. If you will find out what you have been transformed from, I will see that you are made all right again....