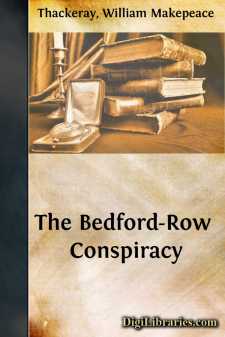 OF THE LOVES OF MR. PERKINS AND MISS GORGON, AND OF THE TWO GREAT FACTIONS IN THE TOWN OF OLDBOROUGH.

"My dear John," cried Lucy, with a very wise look indeed, "it must and shall be so. As for Doughty Street, with our means, a house is out of the question. We must keep three servants, and Aunt Biggs says the taxes are one-and-twenty pounds a year."

"I have seen a sweet place at Chelsea," remarked John: "Paradise Row, No. 17,—garden—greenhouse—fifty pounds a year—omnibus to town within a mile."

"What! that I may be left alone all day, and you spend a fortune in driving backward and forward in those horrid breakneck cabs? My darling, I should die there—die of fright, I know I should. Did you not say yourself that the road was not as yet lighted, and that the place swarmed with public-houses and dreadful tipsy Irish bricklayers? Would you kill me, John?"

"My da-arling," said John, with tremendous fondness, clutching Miss Lucy suddenly round the waist, and rapping the hand of that young person violently against his waistcoat,—"My da-arling, don't say such things, even in a joke. If I objected to the chambers, it is only because you, my love, with your birth and connections, ought to have a house of your own. The chambers are quite large enough and certainly quite good enough for me." And so, after some more sweet parley on the part of these young people, it was agreed that they should take up their abode, when married, in a part of the House number One hundred and something, Bedford Row.

It will be necessary to explain to the reader that John was no other than John Perkins, Esquire, of the Middle Temple, barrister-at-law, and that Miss Lucy was the daughter of the late Captain Gorgon, and Marianne Biggs, his wife. The Captain being of noble connections, younger son of a baronet, cousin to Lord X——, and related to the Y—— family, had angered all his relatives by marrying a very silly pretty young woman, who kept a ladies'-school at Canterbury. She had six hundred pounds to her fortune, which the Captain laid out in the purchase of a sweet travelling-carriage and dressing-case for himself; and going abroad with his lady, spent several years in the principal prisons of Europe, in one of which he died. His wife and daughter were meantime supported by the contributions of Mrs. Jemima Biggs, who still kept the ladies'-school.

At last a dear old relative—such a one as one reads of in romances—died and left seven thousand pounds apiece to the two sisters, whereupon the elder gave up schooling and retired to London; and the younger managed to live with some comfort and decency at Brussels, upon two hundred and ten pounds per annum. Mrs. Gorgon never touched a shilling of her capital, for the very good reason that it was placed entirely out of her reach; so that when she died, her daughter found herself in possession of a sum of money that is not always to be met with in this world.

Her aunt the baronet's lady, and her aunt the ex-schoolmistress, both wrote very pressing invitations to her, and she resided with each for six months after her arrival in England....