The Battle of the Strong - Complete A Romance of Two Kingdoms 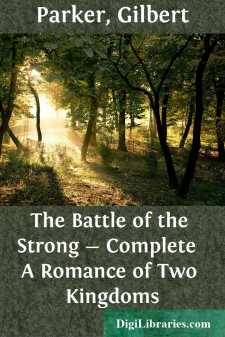 This book is a protest and a deliverance. For seven years I had written continuously of Canada, though some short stories of South Sea life, and the novel Mrs. Falchion, had, during that time, issued from my pen. It looked as though I should be writing of the Far North all my life. Editors had begun to take that view; but from the start it had never been my view. Even when writing Pierre and His People I was determined that I should not be cabined, cribbed, and confined in one field; that I should not, as some other men have done, wind in upon myself, until at last each succeeding book would be but a variation of some previous book, and I should end by imitating myself, become the sacrifice to the god of the pin-hole.

I was warned not to break away from Canada; but all my life I had been warned, and all my life I had followed my own convictions. I would rather not have written another word than be corralled, bitted, saddled, and ridden by that heartless broncho-buster, the public, which wants a man who has once pleased it, to do the same thing under the fret of whip and spur for ever. When I went to the Island of Jersey, in 1897, it was to shake myself free of what might become a mere obsession. I determined that, as wide as my experiences had been in life, so would my writing be, whether it pleased the public or not. I was determined to fulfil myself; and in doing so to take no instructions except those of my own conscience, impulse, and conviction. Even then I saw fields of work which would occupy my mind, and such skill as I had, for many a year to come. I saw the Channel Islands, Egypt, South Africa, and India. In all these fields save India, I have given my Pegasus its bridle-rein, and, so far, I have no reason to feel that my convictions were false. I write of Canada still, but I have written of the Channel Islands, I have written of Egypt, I have written of England and South Africa, and my public—that is, those who read my books—have accepted me in all these fields without demur. I believe I have justified myself in not accepting imprisonment in the field where I first essayed to turn my observation of life to account.

I went to Jersey, therefore, with my teeth set, in a way; yet happily and confidently. I had been dealing with French Canada for some years, and a step from Quebec, which was French, to Jersey, which was Norman French, was but short. It was a question of atmosphere solely. Whatever may be thought of The 'Battle of the Strong' I have not yet met a Jerseyman who denies to it the atmosphere of the place. It could hardly have lacked it, for there were twenty people, deeply intelligent, immensely interested in my design, and they were of Jersey families which had been there for centuries. They helped me, they fed me with dialect, with local details, with memories, with old letters, with diaries of their forebears, until, if I had gone wrong, it would have been through lack of skill in handling my material. I do not think I went wrong, though I believe that I could construct the book more effectively if I had to do it again....