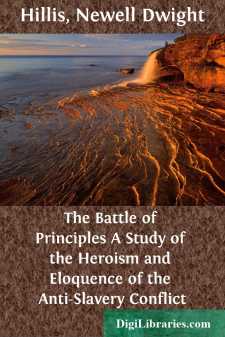 I RISE OF AMERICAN SLAVERY: GROWTH OF THE TRAFFIC

The history of the nineteenth century holds some ten wars that disturbed the nations of the earth, but perhaps our Civil War alone can be fully justified at the bar of intellect and conscience. That war was fought, not in the interest of territory or of national honour,—it was fought by the white race for the enfranchisement of the black race, and to show that a democratic government, conceived in liberty, and dedicated to the proposition that all men are created equal, could permanently endure.

In retrospect, the Great Rebellion seems the mightiest battle and the most glorious victory in the annals of time. The battle-field was a thousand miles in length; the combatants numbered two million men; the struggle was protracted over four years; the hillsides of the whole South were made billowy with the country's dead; a million men were killed or wounded in the two thousand two hundred battles; thousands of gifted boys who might have permanently enriched the North and South alike, through literature, art or science, were cut off as unfulfilled prophecies in the beginning of their career, and what is more pathetic, another million women, desolate and widowed, remained to look with altered eyes upon an altered world, while alone they walked their Via Dolorosa. In the physical realm the black shadow of the sun's eclipse remains but for a few minutes, but through four awful years the nation dwelt in blackness and dreadful night, while fifty more years passed, and the shadow has not yet disappeared fully from the land.

Strictly speaking, the Civil War began with the debate between Daniel Webster and Calhoun in 1830. These intellectual giants set the battle lines in array in the halls of the Senate. The warfare that began with arguments in Congress was soon transferred to the lyceum and lecture hall, then to the pulpit and press, then to the assembly rooms of State legislatures, until finally it was submitted to the soldiers. At last Grant, Sherman and Thomas witnessed to the truth of Webster's argument, that the Union is one and inseparable, that it should endure now and forever, but the endorsement was written with the sword's point, and in letters of blood. The conflict raged, therefore, for thirty-five years, and some of the most desperate battles were fought not with guns and cannon, but with arguments, in the presence of assembled thousands, who listened to the intellectual attack and defense. In their famous debate, Lincoln and Douglas were over against one another like two fortresses, bristling with bayonets, and with cannon shotted to the muzzle.

The many millions of people in the United States, born or immigrated here since the Civil War, busied with many things during this rich, complex and prosperous era, have suffered a grievous loss, through the weakening of their patriotism. Multitudes have forgotten that with great price their fathers bought our industrial liberty for white and black alike....