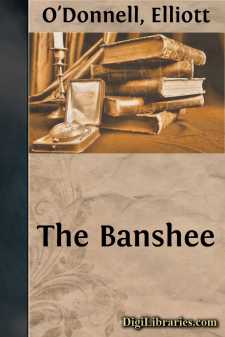 CHAPTER I THE DEFINITION AND ORIGIN OF BANSHEES

In a country, such as Ireland, that is characterised by an arrestive and wildly beautiful scenery, it is not at all surprising to find something in the nature of a ghost harmonising with the general atmosphere and surroundings, and that something, apparently so natural to Ireland, is the Banshee.

The name Banshee seems to be a contraction of the Irish Bean Sidhe, which is interpreted by some writers on the subject “A Woman of the Faire Race,” whilst by various other writers it is said to signify “The Lady of Death,” “The Woman of Sorrow,” “The Spirit of the Air,” and “The Woman of the Barrow.”

It is strictly a family ghost, and most authorities agree that it only haunts families of very ancient Irish lineage. Mr McAnnaly, for instance, remarks (in the chapter on Banshees in his “Irish Wonders”): “The Banshee attends only the old families, and though their descendants, through misfortune, may be brought down from high estate to ranks of peasant farmers, she never leaves nor forgets them till the last member has been gathered to his fathers in the churchyard.”

A writer in the Journal of the Cork Historical and Archæological Society (Vol. V., No. 44, pp. 227-229) quotes an extract from a work entitled “Kerry Records,” in which the following passage, relating to an elegiac poem written by Pierse Ferriter on Maurice Fitzgerald, occurs: “Aina, the Banshee who never wailed for any families who were not of Milesian blood, except the Geraldines, who became ‘more Irish than the Irish themselves’; and in a footnote (see p. 229) it is only ‘blood’ that can have a Banshee. Business men nowadays have something as good as ‘blood’—they have ‘brains and brass,’ by which they can compete with and enter into the oldest families in England and Ireland. Nothing, however, in an Irishman’s estimation, can replace ‘blue blood.’”

Sir Walter Scott, too, emphasises this point, and is even more specific and arbitrary. He confines the Banshee to families of pure Milesian stock, and declares it is never to be found attached to the descendants of the multitudinous English and Scotch settlers who have, from time to time, migrated to Ireland; nor even to the descendants of the Norman adventurers who accompanied Strongbow to the Green Isle in the twelfth century.

Lady Wilde goes to the other extreme and allows considerable latitude. She affirms that the Banshee attaches itself not only to certain families of historic lineage, but also to persons gifted with song and music. For my own part I am inclined to adopt a middle course; I do not believe that the Banshee would be deterred from haunting a family of historical fame and Milesian descent—such as the O’Neills or O’Donnells—simply because in that family was an occasional strain of Saxon or Norman blood, but, on the other hand, I do not think the Banshee would ever haunt a family that was not originally at least Celtic Irish—such, for instance, as the Fitz-Williams or Fitz-Warrens—although in that family there might happen to be periodic infusions of Milesian blood.

I disagree, in toto, with Lady Wilde’s theory that, occasionally, the Banshee haunts a person who is extremely poetical and musical, simply because he happens to be thus talented. In my opinion, to be haunted by the Banshee one must belong to an Irish family that is, at least, a thousand years old; were it not so, we should assuredly find the Banshee haunting certain of the musical and poetical geniuses of every race all over the world—black and yellow, perhaps, no less than white—which certainly is not the case.

The Banshee, however, as Mr McAnnaly says, does, sometimes, travel; it travels when, and only when, it accompanies abroad one of the most ancient of the Irish families; otherwise it stays in Ireland, where, owing to the fact that there are few of the really old Irish families left, its demonstrations are becoming more and more rare....