The Banished A Swabian Historical Tale. In Three Volumes. 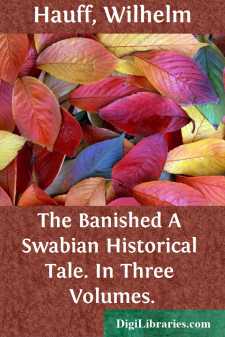 "His varied life is toss'd on Faction's wave,

A leader now, and now a party's slave;

And shall his character a waverer's seem?

If that's a fault, impute it not to him;

He play'd a stake, and fortune threw the die;

So look upon him with a brother's eye.

We would for him an interest create,

His own his virtues, and his faults his fate."

The events which are recorded in the following pages, took place in that part of Southern Germany situated between the mountainous district of the Alb and the Black Forest. That portion of territory is bounded by the former on the north-west, by a long chain of hills of unequal height and breadth, extending southward, whilst the forest, commencing from the sources of the Danube, stretches uninterruptedly to the banks of the Rhine. Being composed of woods of black pine, it forms a dark background to the beautiful picture produced by a luxuriant country, rich in vineyards and watered by the Neckar, which flows through it.

This country, which is the "Würtemberg" treated of in these volumes, was originally of small compass. Its previous history, which is enveloped in darkness, tells us that it rose through various conflicting struggles to its present position among the neighbouring states. When we reflect on the time when it was surrounded by such powerful frontier neighbours as the Stauffens, the Dukes of Teck and the Counts of Zollern, we are astonished that its name should still exist as a nation; for the repeated storms of internal as well as external violence often threatened to erase it from the annals of history. There was a time, indeed, when the head of the reigning family was, to all appearance, driven for ever from the halls of his ancestors. Duke Ulerich von Würtemberg being obliged to fly his country and seek shelter in painful exile from the fury of his enemies, left his castles in the possession of foreign masters, his lands being occupied by their mercenaries. Little more was wanting to complete the extinction of the name of Würtemberg, than the parcelling out of the spoil of its blooming fields among the many, or the whole becoming a province of the house of Austria.

Among the many events related by the Swabians of their country and their ancestors, there is none more fraught with romantic interest than the struggles of that period, which are closely connected with the extraordinary fate of their unfortunate prince. We have attempted to bring them to life again, as they have been related to us on the heights of Lichtenstein and the banks of the Neckar, at the risk, however, of being misapprehended. We shall probably be told that the character of Ulerich is one not fit to be exhibited in a favourable point of view in an historical romance. He has been calumniated in many instances, and it has been even the custom, when reviewing the long list of Dukes of Würtemberg, to pass over in silence the descendant between Eberhard and Christoph, and to look upon him with a kind of horror, as if the troubles of a country were to be attributed solely to the conduct of its ruler, or that it were better to bury in oblivion the days of its misfortunes....